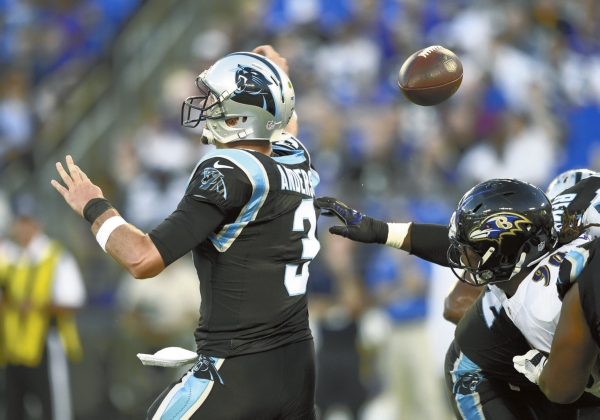 BALTIMORE (AP) — Cam Newton directed a 68-yard drive in his only series, then stepped aside as the Carolina Panthers lost to the Baltimore Ravens 22-19 on Thursday night in a preseason opener.

Newton, the reigning NFL MVP, went 5 for 6 for 36 yards before being replaced by 33-year-old Derek Anderson.

Graham Gano kicked four field goals for the Panthers, who went 15-1 last year and won the NFC championship before falling to Denver in the Super Bowl.

Baltimore was without quarterback Joe Flacco, who’s coming off a season-ending knee injury. Running back Justin Forsett; wide receivers Steve Smith and Breshad Perriman; and linebackers Terrell Suggs and Elvis Dumervil were also held out of the game.

The Panthers launched their preseason with a crisp 14-play march overseen by Newton, who opted not to employ the running aspect of his game.

Working out of the no-huddle offense, Newton completed his first five passes before overthrowing an open Ted Ginn Jr. in the back of the end zone. That forced Carolina to settle for a field goal.

Anderson threw a TD pass to Devin Funchess for a 10-0 lead before the Ravens answered with touchdowns by Terrance West and Javorius Allen.

Ryan Mallett, who started the final two games for Baltimore last year, got the call in this one, too. He played the entire first half, going 11 for 15 for 91 yards and a score.

PHELPS ON THE BIG SCREEN

During a break in the fourth quarter, footage of Olympic star Michael Phelps winning a gold medal in the 200-meter IM was shown on the scoreboard. The crowd cheered as Phelps, a Baltimore native, reached the finish line.

Temperature at game time was 94 degrees, with a heat index of 102 degrees.

Panthers: Cameron Artis-Payne, Fozzy Whitaker and Brandon Wegher did little to separate themselves in the battle for the backup running back spot. Artis-Payne gained 10 yards on five carries, Wegher rushed for 4 yards on seven attempts and Whittaker had no yardage on three carries.

Panthers: WR Brenton Bersin left with a rib injury. He had five catches for 69 yards.