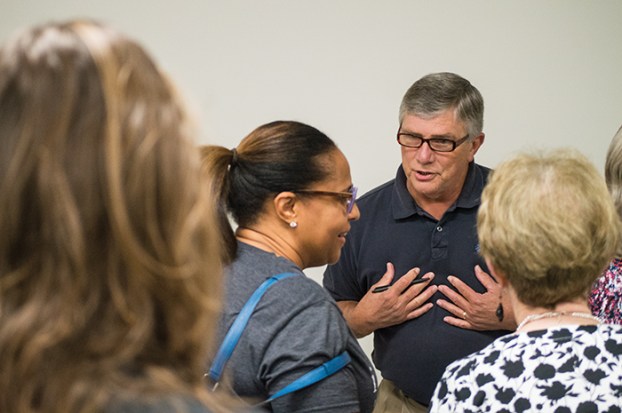 SALISBURY — Responding to a federal court ruling, the Rowan County Board of Elections on Friday passed an early voting plan that left both Democrats and Republicans feeling disappointed.

By a bipartisan vote, the elections board approved a plan that keeps almost all of the nearly 500 hours that were previously approved in July. The board also added 50 hours of early voting time that will occur only at the Board of Elections office at West End Plaza.

The Rowan County Board of Elections — like many across the state — needed to approve a new early voting plan because of a federal court ruling that struck down a 2013 state law.

The Friday meeting attracted a large group of people, including both of Rowan County’s representatives in the N.C. House and the chairmen of the local Republican and Democratic parties.

Days earlier, the Rowan County Tea Party sent its members an email authored by local Republican Elaine Hewitt, who asked people show up at Friday’s meeting, argue for a single voting site in Salisbury and argue against allowing voting on Sunday. Republicans showed up in force. They were unsuccessful in lobbying for a single Salisbury voting site and successful in preventing the board from allowing a Sunday “souls to the polls” early voting day. However, the Board of Elections had decided during a previous meeting that Sunday early voting wouldn’t be worthwhile.

If Chick-fil-a can be closed on a Sunday and make “billions of dollars per year,” then Rowan County didn’t need to allow Sunday early voting, Kidd said.

State Rep. Carl Ford, R-76, said voters should have enough time during the 17-day voting period to not require voting on Sunday.

When arguing for a single Salisbury early voting site, local Republicans said it wouldn’t be fair to allow Salisbury to have two sites and give other towns a single site. Salisbury has the largest population of any municipality in Rowan, but the southern portion of the county, including towns, actually contains a larger population.

After the meeting, Kannapolis resident and N.C. Democratic Party Second Vice Chair Veleria Levy questioned why the board talked about a reduction in voting sites instead of an expansion.

“I think what happened today is the people of Rowan County were railroaded,” she said.

When the Rowan County Board of Elections approved its previous plan, it extended early voting hours to 6:30 p.m. on certain days to allow for post-work voters. The board picked a Wednesday specifically because some local churches offer services then.

“I drive on the interstate for a living, and I know that you cannot get in your vehicle from your job where you get off at 5 o’clock and make it to the polls,” Levy said. “By the time you get in your car in Charlotte, it’s probably 5:30 p.m. You cannot get to Salisbury, get out of your car and into a polling place by 6:30 p.m. It cannot happen.”

Levy accused the local Republican Party of putting pressure on its members to end early voting at 6:30 p.m. on all days.

“They packed this room and even brought a police officer,” she said. “What I found very interesting is that I stood up and argued for an additional voting site in the county, but everybody already had their talking points and their minds made up and stood against Sunday voting. Sunday voting had already been ruled out.”

Before Andrews and Hudson settled on a compromise, board members repeated many of the same points mentioned by people during public comments. Collins, however, was the first to propose that the county remove the Rowan Public Library as a site for early voting — a suggestion that didn’t go over well with Hudson.

“Well, I don’t agree with anything you guys have said today, so it looks like we’re not going to be unanimous,” he said.

In the final early voting plan:

• The first week of early voting, Oct. 20-26 weekdays from 8:30 a.m. to 6:30 p.m, will be offered at the Board of Elections Office in West End Plaza.
• More polling places will be open Oct. 27-Nov. 5 weekdays from 8:30 a.m. to 6:30 p.m. They include Rowan Public Library Headquarters, Cleveland Town Hall, Spencer Municipal Building, Rockwell American Legion Building and Rowan Public Library South Rowan Regional branch. The Board of Elections will also be open at those times.
• On Saturday, Oct. 29, all early voting sites mentioned above will be open from 10 a.m. to 5 p.m
• On Saturday, Nov. 5 — the final chance to vote before Election Day — only the Board of Elections office will be open. Hours will be 8 a.m. to 1 p.m.

The plan will become final if it is approved by the N.C. Board of Elections. However, local board members said they were unclear whether an approval would come, since Friday’s vote wasn’t unanimous.