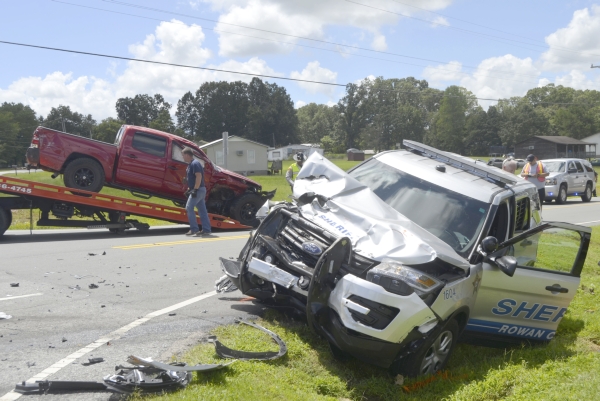 Rowan County Sheriff's Master Deputy Charlie Ashby recieved minor injuries following this two-vehicle collision at the intersection of Sells and East Ridge roads. The driver of the pickup said the sun was in his eyes and he didn't see the patrol vehicle. He turned into the path of the patrol vehicle and overturned. Shavonne Walker/Salisbury Post

SALISBURY — A Rowan County Sheriff’s deputy received minor injuries after his patrol vehicle and a pickup collided at the intersection of East Ridge and Sells roads. The impact pushed both the truck and the deputy’s sports utility vehicle about 30 feet.

The pickup driver, Cody James Mullis, 21, of Salisbury, turned into the path of the deputy’s vehicle. Mullis told first Sgt. S.L. Pace of the N.C. Highway Patrol that the sun was in his eyes. The pickup overturned and landed behind the patrol vehicle.

Mullis, who was seen walking around the scene, was not injured. Pace said he believed Ashby may have a concussion. The deputy was taken to Novant Health Rowan Medical Center via ambulance. Both men were wearing seat belts and the airbags did deploy in both vehicles, the trooper said.

Mullis was charged with failure to yield the right of way. Pace said speed was not a factor in this crash.