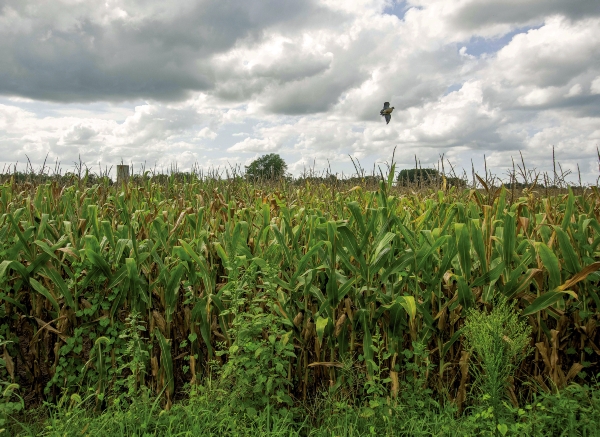 JON C. LAKEY / SALISBURY POST A mourning dove lifts out of the cornfield off Woodleaf Road on Thursday afternoon. After the drought conditions of 2015 that severely effected the corn harvest, the fields in Rowan County planted in corn faired much better with the rain that came later in the growing season. Early dry conditions in the season left many with the thought of repeat of last years conditions but scattered rain conditions arrived in time to foster growth. Incidentally, the North Carolina Mourning Dove season is a little over three weeks away, opens on September the 3rd.

SALISBURY — In 2015, a drought ruined corn crops in Rowan and surrounding areas but the weather is better this year.

One year ago, however, the Piedmont Research Station wasn’t able to produce enough corn silage for its livestock. It purchased about 700 tons of locally-grown corn silage at a cost of about $25,000 to fill the gap. This year, Hampton says the state-funded facility produced enough corn to store silage for upcoming years. It’s a “bumper crop” year, he said.

“I think it’s actually been an above average year,” he said. “When you look at the actual rainfall, the Piedmont Research Station is just a few inches short, but we’ve received very, very timely rains. It rained just when we needed them for our crops.”

At the Piedmont Research Station, rainfall totals during May, June and July of 2016 are larger than 2015. Less than a dozen days in, August 2016 has already bested rainfall totals from the same month in 2015.

In May and July of 2015, rainfall totals at the research station didn’t top 1 inch — an occurrence that hasn’t been repeated this year.

National Weather Service data shows most of Rowan County has received a minimum of 20 inches of rain since the start of 2016.

Farmer Darryl Corriher, whose corn fields sit in western Rowan County, said he believes his yields in 2016 will be about average when compared with other years. Corriher said he’s not planning to harvest for a few more weeks.

“It is better, but it’s not great,” he said. “Overall, I think we’ll have a better crop, but I really won’t know how we’re doing until we get in the field and start picking.”

Corriher said he’s worried about how low prices might affect the total output, but there’s no doubt that this year he’ll turn a larger profit than 2015.

Soybeans are also off to a good start, he said.

Hampton said optimism is key during and even after a year of significant drought.

“Farming is a lifestyle, not a vocation,” he said. “Generally, if (farmers) can make enough money to pay their bills and plant their crop, they’re happy.”

Farming is like gambling in a way, according to Corriher. He said farming is like throwing money into a field and not knowing what you’ll get back.