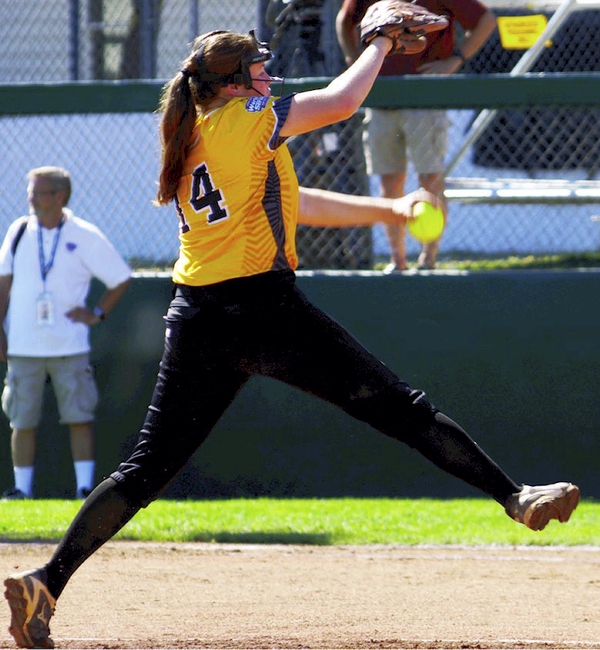 The Rowan Little League 12U girls softball team has enjoyed a lot of wins that well, frankly, have not been close games.

But on Friday at the Little League Softball World Series in Portland, Ore., Rowan found itself involved with an old-fashioned pitching duel with the team from Grandville, Mich., the champs of the Central Region.

Scoreless for seven innings, Rowan erupted for six runs in the top of the eighth frame and won, 6-0, as pitcher Taylor Walton completed the shutout, a five-hitter with eight strikeouts.

Rowan, the Southeast champs, move to 2-0 in the World Series, having blitzed Canada on Wednesday, 16-2. The team was idle on Thursday and will play the Philippines today at 6 p.m., eastern time.

Walton threw 98 pitches in the game, walking none and allowing just three hits until the last inning. By Little League rules, a pitcher can throw up to 12 innings in one day, but if she pitches at least eight innings, she cannot pitch again the next day.

Rowan coach Steve Yang was confident that his team’s other pitchers, Kary Hales and Madelyn VonCanon could handle Saturday’s opponent, the Philippines, so he left Walton in the game.

However, Michigan coaches removed their starting pitcher, Jamie Vander Meer, after six shutout innings against Rowan, knowing that they might need her today against the team from Utah.

“The schedule may have favored us a little there, but we couldn’t have asked for Taylor to pitch any better than she did today,” said Yang. “Being left-handed, her screw ball tails away from right-hand hitters and makes it hard for them to square it up and pull it with any power. She was really good today (Friday).”

Walton was especially good in the bottom of the fifth inning when the game was still 0-0. The first two Michigan batters reached on errors, one by Walton herself. With runners on second and third bases with no out, Walton came through with two strikeouts.

She then got a groundball off the bat of Brooke Bernt to second baseman Ellie Wilhelm, who threw to first for the out and the end of the scoring threat.

“I just had to bear down there,” said Walton, of the fifth inning. “I don’t let baserunners get into my head and I’ve been in tough situations before. I just trust the spins on my pitches and I’m confident in my defense that they can make plays behind me.”

Walton also had wanted to improve on her first outing in the World Series on Wednesday when she walked four batters in the win over Canada.

“Coach (Rob) Hales reminds me every game to throw strikes, so I was disappointed in myself for walking four batters the other day,” added Walton. “I wanted to make sure that I improved for my team.”

Rowan used its speed to create pressure on the Michigan defense in the top of the eighth inning, to break the deadlock.

Speedy leadoff batter Allison Ennis reached on an error to start the inning and Kary Hales really ignited the rally with a single that advanced Ennis to third. Hales promptly stole second base and Michigan pitcher Bernt, who had come in for Vander Meer, then uncorked a wild pitch, scoring Ennis for the first run of the game.

Tate Barger then stroked a hard single to left field, scoring Hales and again, moving everyone else up. It was 2-0.

VonCanon, pinch-hitting for Kaylin Dowling, punched a two-run single to right field, and Yang scored on a throwing error on the play and suddenly, it was 5-0.

VonCanon later scored on Wilhelm’s groundout, for the final margin.

Walton recorded her seventh and eighth strikeouts to start the bottom of the final inning, but Michigan then had two straight singles to mount a mild threat. Ellen Derrer then popped out to Rowan’s Jaden Vaughn in foul territory, ending the game.

“We were fortunate to win this game,” said Yang. “Their starting pitcher (Vander Meer) was good, similar to the pitcher we saw from Rhode Island in last year’s final. She had a good fastball, but a very good change-up that we never seem to adjust to.

“It was good for our girls to be in a tight one,” continued Yang. “It will be good for us going forward, but you can tell that where they may have been nervous here last year, now it’s just pure confidence. We’ve just got to make sure they don’t get over-confident.”

NOTES: An odd situation has once again come up at the World Series. According to Yang, Rowan’s opponent on Sunday is the Utah team and being Mormon, cannot play on Sunday. So Rowan may get a forfeit win over Utah, even though discussions continue about it, Yang said. … Last year in Portland, Rowan was in the middle of a controversy when a team from Washington laid down against Yang’s team in order to improve its standing within the pool play.