The Dart: An afternoon of fishing, playful banter at the lake 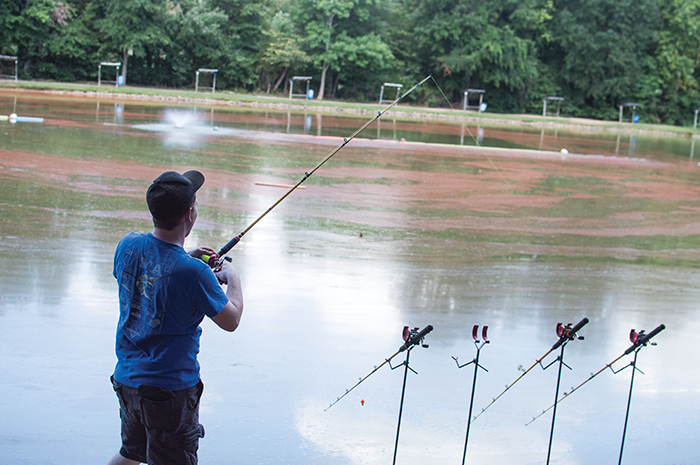 Josh Bergeron / Salisbury Post - Jacob Pruitt of China Grove reels in his line during a recent trip to a carp lake on Miller Road. Pruitt says he visits the lake nearly every day.

As Pruitt attached bait to a hook, suddenly the line on his fishing rod suddenly tightened. He saw the movement out of the corner of his eye and froze. He waited and watched to see if a fish was on the line.

A split second later the line tightened further. Pruitt, who now lives in China Grove, rushed to grab the line and began reeling the line in.

It wouldn’t be the biggest fish of the day. He guessed it was 13 pounds and he tossed it back in the lake.

On this August afternoon, Pruitt was one of a dozen or so people fishing at Ed’s Carp Lake on Miller Road. The concept behind this carp lake and others is relatively simple — pay a fee to catch some fish. If your catch ranks as the largest during a specific period of time, you win.

“It’s like bingo, but with fish,” he said. “You never know what’s gonna come out next”

The type and contents of bait matter, Pruitt said. At different times of the year, different types of bait work better. He’s even got a special kind of bait that he didn’t like.

The adrenaline brings him back for more, he said.

“You catch one and you’ll be addicted,” he said. “When you catch that pig, that’s when the adrenaline starts.”

“Pig” is a term he used for big fish.

A few dozen yards away from Pruitt were Daxton Miller, a China Grove resident, and Rodney Sorrles, a Lexington resident. If luck is important in catching carp, Miller and Sorrles hadn’t seen quite as much luck as Pruitt.

Jimmy Cook, also from China Grove, was sitting with Miller and Sorrles. Cook says he isn’t much of a fisherman. He usually “shoots the breeze,” but he caught a fish before Miller or Sorrles.

The group of family and friends debated whether catching “pigs” requires skill.

“There’s really no skill in it,” said a member of the group.

“Oh yeah, there’s skill in it, but you just don’t have any,” another fired back.

Just as Miller and Sorrles were being teased about not catching any fish, a fishing line on one of their rods moved. As if it was instinctive, the pair rushed to the rod. One grabbed a net. The other reeled the fish in.

The carp was obscured by the murky water, but it steadily moved closer to the shore with each turn of the fishing reel. When the pair lifted the fish from the water, it turned out to be smaller than one caught by Cook earlier in the afternoon.

“Told you that you didn’t have any skill,” Cook said.