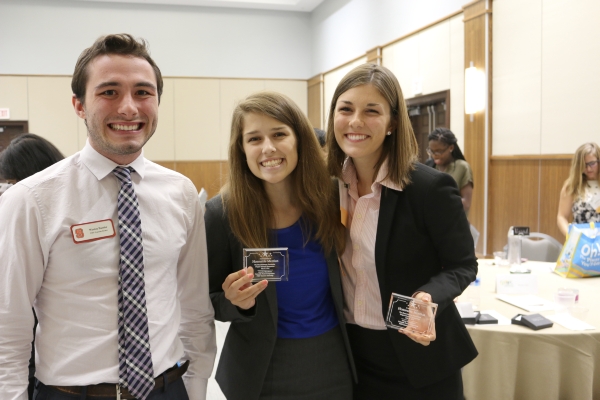 KANNAPOLIS – Scientists, graduate students and undergraduate interns celebrated a summer of science as part of the 2016 Plant Pathways Elucidation Project (P2EP) at the annual Summer Research Symposium. The symposium, held at the Laureate Center in Kannapolis City Hall on Wednesday, July 27, was the culminating event for 27 student interns who’ve been working alongside research scientists since May. Research teams presented highlights of their findings, displayed a scientific poster and heard from a world-renowned expert in the emerging field of CRISPR genetic technologies.

And the winners are:

Zoe Cantu-Backhaus, a sophomore at UNC Charlotte, and Claire Thetford, a senior at N.C. State University, were the winning team for the poster competition. For Thetford, it’s the second year in a row she’s won the competition, and her fourth summer as a P2EP intern. “P2EP is such a well-rounded program; in four years I’ve gained wet lab experience, worked side by side with graduate students designing research protocols, and learned to present myself professionally in the scientific community,” Thetford said.

Under the guidance of their graduate student mentor, Kelsey Zielinski, and N.C. State faculty members, Massimo Iorizzo, PhD, and Mary Ann Lila, PhD, Cantu-Backhaus and Thetford’s award-winning poster covered their research on the biochemical profile of a species of blueberry with anti-inflammatory properties. Lila is the director of the Plants for Human Health Institute at the North Carolina Research Campus (NCRC) and a leading researcher in the study of the phytoactive compounds in plants, namely berries.

Coming in second place in the poster competition was high school student, Nikhita Vemulapalli, who attends the North Carolina School of Science and Mathematics. Vemulapalli worked with graduate student Weston Bussler to study the perceived bitterness of broccoli.

An honorable mention went to a pair of interns who were also mentored by Bussler: undergraduate students Mikayla Bowen and Ashley Buige, who both attend the University of North Carolina at Chapel Hill. Bowen and Buige worked together to study the role of oats in gastrointestinal health.

Keep calm and ‘CRISPR’ on

Rodolphe Barrangou, PhD and expert in CRISPR technology, delivered the keynote address providing perspective on the rapid scientific advances and the promising research opportunities that center around this breakthrough technology. Described as the “CRISPR Craze,” Barrangou shared examples of promising research in healthcare (reversing muscular dystrophy in mice), and using the technology to develop non-GMO advances in food crops. He says, “What journalists and news outlets are calling ‘science fiction’ is actually real, tangible science that is taking research labs by storm.” Barrangou was one of the scientists who, in 2013, identified a cell’s utilization of the genetic anomaly that is CRISPR. What was first recognized as an immune defense in bacteria, now appears to be an opportunity for precise gene editing and other clinical applications.

“It’s so great to learn more about something that has quickly become a major part of the field of science,” Bowen said. “What really stuck with me from Dr. Barrangou’s talk is all of the applications of CRISPR available at a low cost – they’re so widespread that in the near future, no matter what kind of lab I might work in, there’s a good chance I’ll be working with this technology.”

P2EP is celebrating a fourth successful summer internship, with more than 100 interns participating since the program’s inception. However, P2EP is more than a summer internship program; it continues year-round with PhD students working with university scientists and industry leaders to understand the plant pathways that lead to the bioavailability of plant compounds in fruits and vegetables that can ultimately benefit human health. Applications for next summer’s internship program will be available in December. For more information about P2EP, visit p2ep.org.