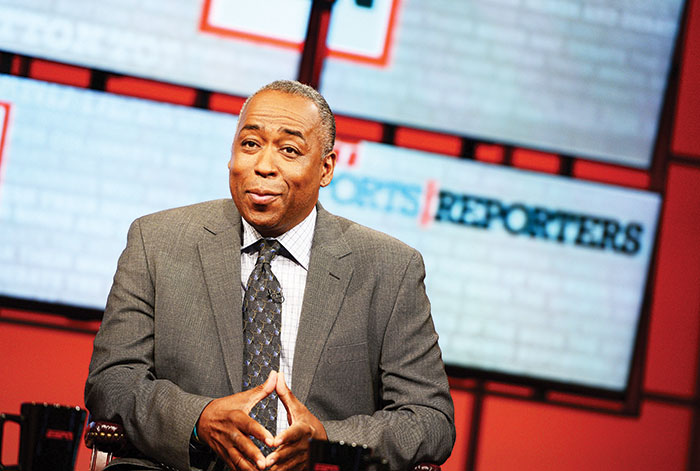 NEW YORK (AP) — John Saunders, the versatile sportscaster who has hosted ESPN’s “The Sports Reporters” for the last 15 years, has died, the network announced Wednesday. He was 61.

A cause of death was not announced.

“This tragic news brings us unspeakable sorrow. John was the patriarch of our family, and we can’t believe he is gone,” Saunders family said in a statement. “We are sincerely touched by the outpouring of support and sadness, which is a reflection of the character and integrity that defined him.

“While we don’t yet have all the specifics, John wasn’t feeling well physically in recent days and sadly, he was unresponsive earlier this morning. We appreciate all of the thoughts and prayers for our cherished father, husband, brother and uncle.”

Saunders took over as host of “The Sports Reporters,” a Sunday morning staple of ESPN programming, after Dick Schaap died in 2001. Saunders played the role of calm traffic cop on the panel show that features three sports journalists volleying opinions on the top sports news of the day.

“John was an extraordinary talent and his friendly, informative style has been a warm welcome to sports fans for decades. His wide range of accomplishments across numerous sports and championship events is among the most impressive this industry has ever seen,” ESPN President John Skipper said in a statement.

Saunders was also a founding member of the board of directors for The V Foundation for Cancer Research, a charity started by the network after former college basketball coach and ESPN announcer Jim Valvano died of cancer in 1993.

“He was as close to Jimmy V as anybody at ESPN,” said Dick Vitale, who has worked at ESPN for decades with Saunders and considered him one of his closest friends.

Vitale said Saunders was a diabetic, but he was not ailing, and the death of one of his closest friends was unexpected. Saunders has been the master of ceremonies at Vitale’s gala and V Foundation fundraiser in Sarasota, Florida, in 10 of 11 years the event has been held, said the longtime college basketball analyst.

When Vitale had to have throat surgery that threatened his career in 2008, Saunders surprised him at the hospital and was there with Vitale before and after the procedure.

“The doctor told me that there was a good chance it was going to be cancer,” Vitale told the AP in a phone interview. “I said, ‘John, do me a favor. When you come in that room after just give me thumbs up if it’s not … and if it is don’t do anything.’ And when I woke, the first guy I saw after surgery was John and I saw thumbs up and we hugged.”

Vitale added: “He was like family. I’m so shocked.”

The news of Saunders’ death was reported on ESPN’s morning edition of “SportsCenter” from the Olympics in Brazil by anchor Hannah Storm, who struggled to compose herself enough to get through the announcement.

“John’s passion for his family, his nation, his favorite sport & the V foundation will stay with me forever,” NBC’s Mike Tirico, a longtime ESPN colleague of Saunders’, tweeted. “As will his kindness and support.”

Saunders’ death came less than two years after the network lost another popular broadcaster, Stuart Scott, at the age of 49 in January 2015 after a bout with cancer.

Saunders was born in the Toronto area and grew up near Montreal.

“He was very proud to be Canadian,” said Leo Rautins, the former NBA player who teamed with Saunders on Toronto Raptors’ telecasts. “He’d mention it every time he could.”

“One of saddest days of my life today as I grieve suddenly losing my best friend of 42 years, John Saunders. Life will never be the same,” Smith tweeted.

Saunders’ younger brother, Bernie, played 10 NHL games for the Quebec Nordiques from 1979 to 1981.

Saunders worked as a sports anchor at WMAR-TV in Baltimore from 1982 to 1986 before joining ESPN. While at ESPN, he doubled as a play-by-play man for the Raptors.

“I think you’d have a hard time finding anyone to say anything bad about John,” Rautins said. “He was very giving, very caring, very intelligent.”

Saunders lived in Hastings-on-Hudson, New York, with wife Wanda. They had two daughters, Aleah and Jenna.

“He was one of the most significant and influential members of the ESPN family, as a colleague and mentor, and he will be sorely missed,” Skipper said. “Our thoughts are with his loved ones at this extremely difficult time.”