Maggie dies in the arms of a friend 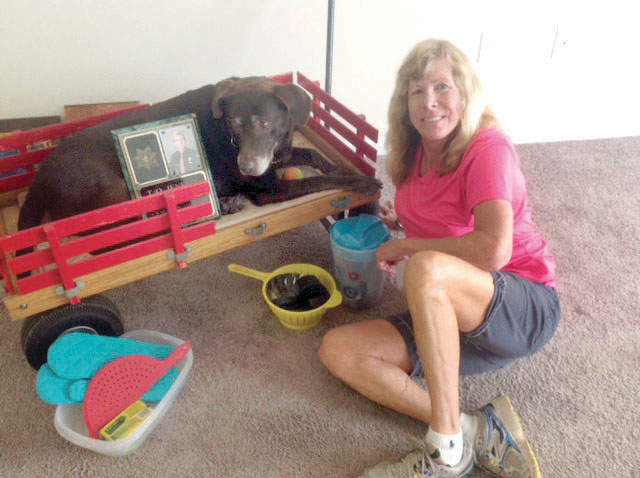 SALISBURY — In about two days, Anna Jenkins will receive Maggie’s cremated remains. Back at her Salisbury apartment Wednesday afternoon, Jenkins began gathering all of Maggie’s stuff — the toys, beds, bowls, food, collars, leashes and the devices that helped her to walk.

Jenkins plans on finding a place to donate these things. Otherwise, she was trying to get through the rest of the day without the service dog that had been — through some pretty tough times — her best friend since 2005.

“It’s strange,” Jenkins says. “I keep looking and expecting to see her and she’s not there.”

“Her dying in my arms was a gift I could not imagine,” Anna Jenkins said.

In a column Tuesday, I had relayed Anna’s desperation in trying to pay for the euthanasia of Maggie, her 14 1/2-year-old chocolate Labrador and service dog. The prices she had been quoted from three different veterinary clinics for the euthanasia and cremation were too much for Anna to afford.

But Maggie’s condition — she had been suffering from cancerous tumors for many months — had worsened to the point Anna knew Maggie’s suffering had to end.

Jenkins, an Army veteran and former law enforcement officer, had called me in hopes that a story would help her find some assistance. I had written about Anna and Maggie even earlier this year when the Rowan Homeless Veterans Task Force had successfully moved them out of the Rowan Helping Ministries shelter and into an apartment.

Julian contacted Ginger Moore at The Splashpaw Foundation in Concord and Faithful Companion of Charlotte. Along with Lazy 5, the two entities agreed to cover all the costs to be associated with Maggie’s lethal injection and her cremation.

The euthanasia was scheduled for 8 a.m. Wednesday. Jenkins said she and Maggie were led into a comfortable room with a big couch and soft music.

About 8:15, Maggie was given a sedative. And Julian entered the room maybe 10 minutes later with the lethal dose.

On the couch — not a hard, cold examination table — Anna held Maggie as the dog died. Both she and Julian cried.

Jenkins said Julian was “phenomenal,” and Lazy 5 was “spectacular” overall in showing compassion for Maggie and her.

Julian praised The Splashpaw Foundation for paying the euthanasia costs, and she said Faithful Companion, a pet cremation business, provides cremation for service dogs as far north as Rowan and Cabarrus counties.

“That was half of the cost, the private cremation,” Julian said. “They do a phenomenal job.”

Moore founded The Splashpaw Foundation in 2013 in memory of family members and pets who died of cancer. Its mission is to assist and improve the research, treatment and care of children and pets in the community, specifically those with cancer.

Focusing on pets in Rowan and Cabarrus counties, The Splashpaw Foundation is 100 percent veterinarian-referred, and it has worked closely with Julian since the beginning. Each year it also provides thousands of pounds of pet food for area rescue animals and Meals on Wheels clients who have pets.

In 2015, the nonprofit donated $14,254 toward veterinary expenses such as those involved in Maggie’s euthanasia.

“I never realized the need was as great as it was,” Moore said.

Moore said the name “Splashpaw” comes from her dog Mia, who enjoys playing in the water. “If there’s a mud puddle, she’ll find it,” Moore said.

Likewise, Anna and I received many phone messages and emails from local veterinarians and the community at large asking what they could do.

A Purple Heart veteran from the VFW Post in Kannapolis said, “I’d like to help her.” A woman in Salisbury called me rather than contacting Jenkins directly because she was sure she would cry otherwise.

A reader from eastern Rowan County said, “I just need to know who to send money to.” And a member of First United Methodist Church remembered having Anna and Maggie as guests on a Sunday morning and how her pastor had blessed Maggie after the service.

This outpouring of concern never surprises me. Anna Jenkins, who is a fairly recent transplant to Salisbury, is starting to figure out the kind of place this is.

“I just want the community to know how grateful I am,” she said.

Maggie was originally trained as a bomb dog in Washington, D.C. She later became a service dog, helping Jenkins cope with post-traumatic stress disorder and anxiety.

Many organizations need dog trainers, Jenkins said, thinking she could volunteer for that kind of work. And who knows, maybe another dog will become her companion in the future.

But for now, Jenkins is still holding Maggie close in her arms.