‘Grateful Grads’ talk about their time at Catawba 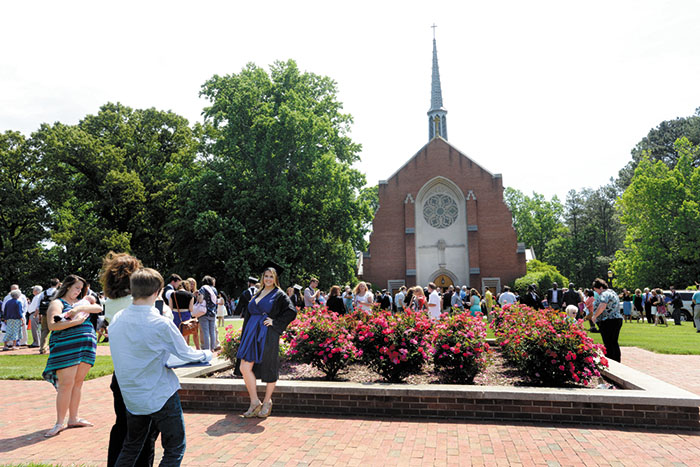 Catawba Senio, Chelsea Hammill, from Gold Hill, poses in front of the Chapel Rose Garden after the graduation in 2015. photo by Wayne Hinshaw, for the Salisbury Post

By Rebecca Rider and Allana Ansboro

But Catawba graduates have a habit of giving out of more than their pocket. Many stay involved with the school years or decades after they graduate by volunteering, serving on Catawba boards or even becoming trustees.

And Catawba graduates said that giving a little time or money is a small thing compared to what they received during their years at the school.

For Trent Newell, a 1998 graduate, Catawba allowed him to “come alive.”

“It was a perfect fit for me, and really allowed me to blossom as a person,” he said.

The school was small, but Newell said the well-rounded education helped him, and the school’s emphasis on volunteering and community service is a lesson that he still lives out today. The faculty at Catawba encouraged students to become a productive member of society, instead of just coming to class every day.

“Once you get a taste of that, I think that you really come to appreciate the important things in life.”

While he was a student at Catawba, Newell said he was involved in the “big brother” program, and mentored two brothers, 8 and 9 years-old, who were in “desperate need.” Newell said he still speaks to both often, and had the pleasure of attending their weddings.

When he graduated, Newell wanted to “give back” to the school. He was lucky enough to receive scholarship money as a student attending Catawba, and said that now he wants to help out others the same way. Newell has created a scholarship for Catawba students, and is working to get it endowed.

“I don’t know that I would ever have gotten that exposure,” Newell said.

Now the president of sales for Andrews Technologies, a small medical device company based in Irvine, Ca., Newell has stayed heavily involved with the school, serving as the president of the Alumni Board, the Hall of Fame Committee and on the Board of Visitors. He’s also a member of the Catawba Chief’s Club.

Newell also worked to get an international studies program started for students attending Catawba. In 2006, Newell was part of the committee that spoke to the Catawba Indian tribe about the school’s mascot. And he said he’s tried to donate a small amount every year since he graduated.

When Newell heard that Catawba was named to the “grateful grads” list, he said he was flattered.

“I felt like maybe I had a small part in helping it get there,” he said. “I think that it will continue to shine. I think there’s better days ahead.”

At first, Thomas Giles only went to college to play baseball. Originally from Virginia, he started out at UNC Charlotte and then transferred to Catawba. He chose Catawba because it was close and because of its status as a Division 2 school, which allowed him to transfer and immediately play on the baseball team.

“On a scale of one to ten, my experience was a ten,” Giles said.

When he transferred to Catawba, his main goal was to play baseball, but he said he also made a personal goal for himself to become more than just an athlete.

He spoke highly of two of his communications professors, Dr. Karl Hales and Cindy Wittum, for exposing him to a career beyond communication arts. He said his professors gave him the courage he needed to put himself out there for writing.

His junior year at Catawba, he was involved in an internship for a semester where he interviewed students for testimonials and then helped a web designer put them on the university website. He said working with Tonia Black-Gold helped mold him into his post-Baccalaureate affairs.

According to Giles, the internship and classes in writing greatly improved his writing skills, which he needed for his major.

While at Catawba, Giles also was co-editor and chief of the student newspaper, “The Pioneer,” and an residential assistant for three years.

He became a member of the Order of the Blue and White after his induction during his junior year. The all male honor society met monthly and helped each other in their studies and gathered to hear motivational speakers on campus.

After graduating, he worked at Catawba in admissions for four years. He has made donations to Catawba’s baseball organizations and was on the alumni board for three years.

He said his experience at Catawba was “life-changing” and that he appreciates what the school did for him.

“It gave me an opportunity I don’t think I would have had at a larger institution,” he said.

“We are proud to be recognized alongside such outstanding institutions and we know this ranking reflects what we constantly hear from our alumni: that Catawba made a difference in their lives for which they are very grateful,” said Catawba President Brien Lewis.