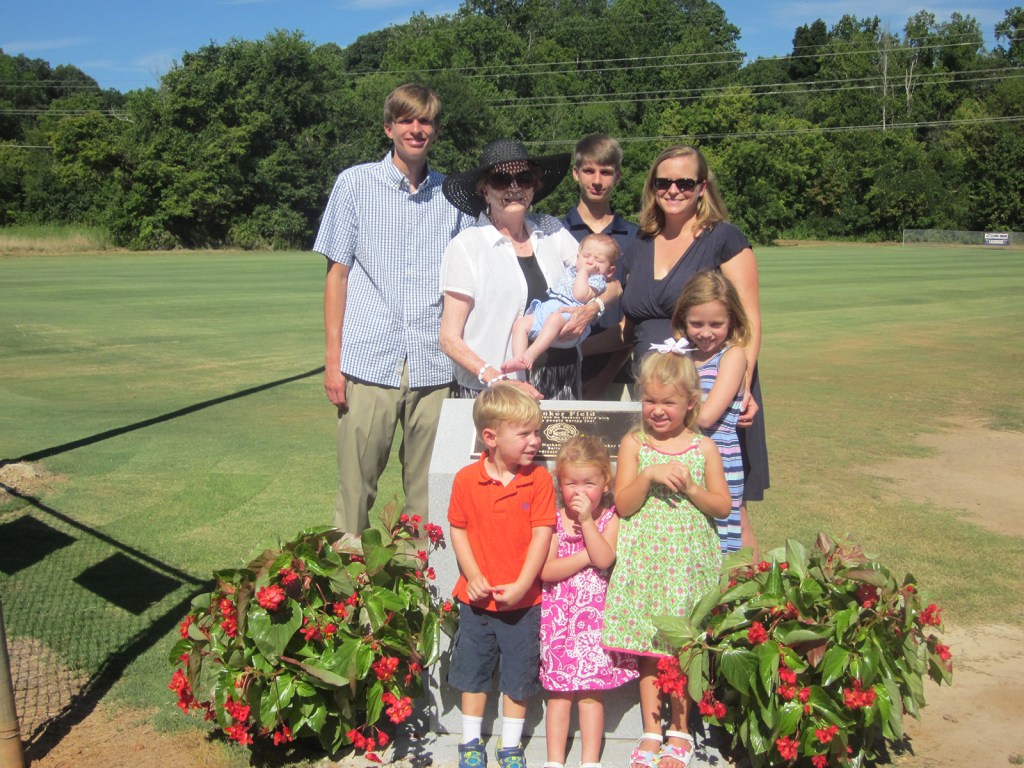 SALISBURY — The  dedication plaque at Bunker Field on the Catawba College campus reads: “May this space be forever filled with young people having fun.” It also notes that the field, which is part of the Frock Fields Athletic Complex, was given by the D. Nathan, Jr. and Betty Bunker Family of Salisbury.

But if the plaque could speak, it would tell you so much more about the Bunker Family, its ties to this land, and its ties to Catawba College.

Matriarch Betty Bunker describes the field, adjacent to Grant’s Creek, as her family’s “country playground.” The Bunker family affectionately referred to it as “the farm.”

Her son, Dennis, says the five acres were where all of the children in the family “learned a lot of life lessons” and “spent untold hours playing on this land.” He notes the games played included mowing grass, gardening, feeding cows and cleaning out the barn which once stood on the property. Dennis also recalls collecting rent and maintaining the five apartment units that used to occupy a section of the property.

Son Dennis calls the gift “visionary,” while his sister, Starla Bunker Bennett, says “the gift of this land reflects 60 years of my parents’ belief that education is important.”

Betty Bunker, deeply moved by her memories at the July 29 dedication ceremony, says the occasion marked “a very sentimental day for me.”

Betty Bunker, the former Betty Tripp of Chapel Hill, said that she and Nathan Bunker of Chatham County were high school sweethearts who married on Dec. 24, 1953. Nathan was a student at Catawba and working at Cannon Mills when the couple had to make a decision after their marriage about where they would live – Salisbury or Kannapolis. They settled on Salisbury and Nathan commuted to his job in Kannapolis.

The couple saved and sacrificed so Nathan could pursue his college degree, because, as Betty notes, “he was really dedicated to his education.” But as their family grew and their children began to arrive, Nathan was unable to finish college.

Nathan enjoyed a career as a real estate investor with other business interests including Bunker Bookstore, one of Salisbury’s first bookstores, located where the Walgreens currently stands on W. Innes Street. He also liked growing potatoes and other vegetables in the one-acre family garden on Bunker Field. He would admonish his children to “dig them all up,” Betty recalls, even going back over the field with the tractor to make sure no potatoes were left behind.

Betty and Nathan marked their 60th anniversary together before Nathan’s death in January of 2014. But if you ask Betty how long she has been married, she will tell you “63 years,” and one quickly understands that her relationship with her husband continues despite Nathan’s death.

Four children were born to Betty and Nathan – Rise, Dennis, Starla and Tripp. Rise’s children, Alex, Daniel and Kristen Lewis, were also raised by the couple as their own, as was David Bunker. In addition to the couple’s three surviving children, Nathan and Betty Bunker have six grandchildren (Daniel, Kristen, Alex (d.), Kye, Colin and Carson) and five great-grandchildren, the newest of whom is named Nathan, born in early 2016 to Kristen and Greg Shue.

“When he was born, I couldn’t call his name,” Betty remembers, “but I do now, and he looks just like Nathan.”

At the dedication, college President Brien Lewis spoke about the family’s connection to the community and the college. “Bunker Field is a cornerstone of the campus and we are grateful to the generosity of your family in providing this for us.”

Dennis Bunker said he hopes his family’s gift will inspire other families to make similar gifts of property to the college. Noting Catawba’s goal of growing its enrollment to 2,400 students by 2025, he said, “The college will need many gifts of land such as this in the college neighborhood in order to accommodate that growth. I hope the college can use this visionary gift from my mom and dad as an example to obtain many other parcels of land for that anticipated growth.”