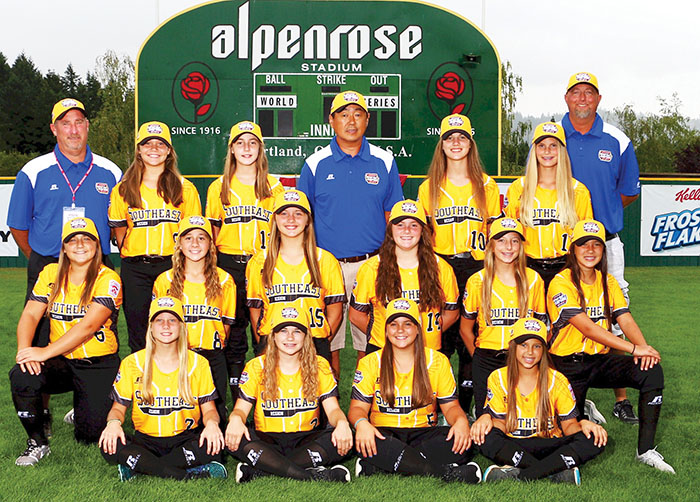 Rowan Little League’s 12U softball team scored 11 runs in the third inning and trounced Canada, 16-2, in four innings on Wednesday in the opening round of the World Series at Alpenrose Stadium in Portland, Ore.
“Every girl who went to the plate in that third inning hit the ball hard — and most of them found holes,” Rowan manager Steve Yang said in a phone interview. “That’s what we always preach. Just keep hitting it hard and good things will happen.”
Newcomer Brooke Kennerly went 3-for-3, while Jaden Vaughn, one of the nine veterans from last year’s world champions, went 2-for-2.
Rowan took a 2-0 lead in the first inning when Allison Ennis reached on an error and scored on a hit by Taylor Walton. Kenadi Sproul ran for Walton, stole a base, and eventually scored on Ellen Yang’s groundout.
Rowan, representing the USA’s Southeast Region, scored three more runs in the second inning. After a hit by Kennerly and two walks filled the bases, Ennis drove in two runs with a hit. Ennis later scored when Rowan pulled off a double steal to make it 5-0.
Canada scored two runs in the top of the third with the help of two walks and a throwing error. Canada might have scored more, but Kennerly’s snap throw to first baseman Kary Hales picked off a runner.
Things got out of hand — in a good way — in the Rowan third. Rowan scored 11 times. Vaughn came through with a pair of run-scoring singles in the inning, while Madelyn VonCanon smacked a two-run double.
“We weren’t sharp at the beginning of the game,” Steve Yang said. “The girls were anxious and they hadn’t played in a while. But by the third inning, we started settling in and hitting balls hard.”
Ennis had two hits and scored twice. Walton went 2-for-3 with two RBIs. Yang scored two runs. Twelve of Rowan’s 14 players scored a run and eight different girls contributed to Rowan’s total of 12 hits.
Walton struck out four and walked four in three innings and allowed one hit. Hales needed only seven pitches to throw a 1-2-3 fourth inning to finish the game.
While the Rowan team has a host of familiar names, pitcher Kali Morton and catcher Caitlin Mann, who starred last summer, moved up to the 14U Rowan team that recently went 5-2 and placed fifth in the Junior World Series in Kirkland, Wash.
The key newcomers this year include Kennerly, who shares catching duties with Yang, and left fielder Tate Barger, who has given the team a power boost. Taylor Walton was part of last year’s team, but her role has increased. Now she’s the No. 1 pitcher.
“Taylor has done a superb job pitching, we can hit the ball, and the girls play very well in the field,” Yang said. “I think this is a deeper team than last year’s because most of the girls are year older, a year stronger and a year wiser. They’re still just girls who are having fun playing softball, but that extra year makes a difference.”
As the defending champ, Rowan is the team to beat. Steve Yang has been asked about that since his plane landed in Oregon.
“We definitely have a target on our backs and everyone wants to knock us off our pedestal,” Yang said. “It’s going to be a challenge. There are a lot of very strong teams here, with the American teams usually being stronger than the international teams. We saw Texas play today, and they looked good. The New Jersey girls here are from a perennial-power program that won the championship in 2014. We’ve been told that the Michigan team in our pool is very strong.”
Rowan’s team has already been through several tough fights after wearing the defending-champs target through the state tournament in Charlotte and the Southeast Regional tournament in Warner Robins, Ga.
“It wasn’t easy getting out of the state, as Washington and Wilkes played us tough,” Steve Yang said. “We also played against very strong competition in our regional, but the girls did a great job.”
Rowan is off today and won’t play again until it tangles with Michigan at 1 p.m. on Friday.
The team will practice for two hours this morning, and then the girls and their parents (the Rowan contingent in Oregon numbers about 50 people) will head to Cannon Beach, 90 minutes from Portland, for a day of relaxation.
“We went to the same beach last year, but it was the day after we lost to Iowa (in pool play), and I was miserable and couldn’t enjoy it,” Steve Yang said. “This year the beach is going to be a lot more fun.”
Wednesday’s game was the first of four that Rowan will play in its five-team pool. The teams in Rowan’s pool are the Philippines, Canada, Michigan’s Grandville Little League and Utah’s Snow Canyon Little League.
The top four teams in each of the two pools will be seeded, 1 through 4, and will advance to a “knockout round” of games against the other pool on Aug. 15. The four winners in that round will advance to semifinal games on Aug. 16 that will be televised by ESPN. Then the championship game will be on ESPN2 on Aug. 17.