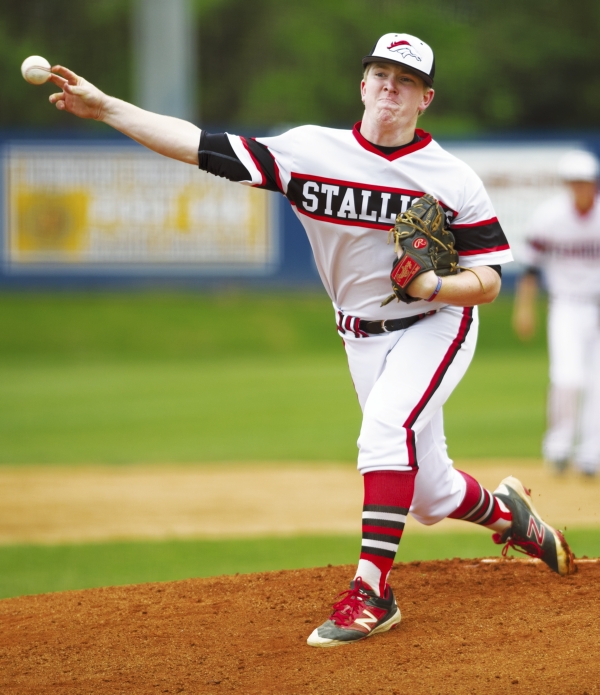 ASHEBORO — Pfeiffer pitching signee Noah Jarrett was one of “the originals.”
That’s what Greater Cabarrus Homeschool Stallions baseball coach Chris Lankford calls the group that got his program started when they were seventh-graders.
The Stallions made their mark, reaching the Homeschool World Series again this season and putting up a 30-6 record. Jarrett was 7-2 with a 1.96 ERA for the Stallions as a senior, and he was a good enough athlete to play third base or outfield when he wasn’t pitching. He batted .274 with 15 RBIs.
“We had a lot of seniors, everyone pulled their weight, and we had a great season,” Jarrett said. “Pfeiffer saw me pitch for the Stallions in a game in Asheboro in late March. It took a little time to work everything out, but I knew that’s where I would be going to college.”
The Stallions beat North Moore in that game that Pfeiffer scouted at McCrary Park, 15-1. Jarrett allowed only two hits in six innings.
Jarrett pitched for Rowan County’s state-championship American Legion team in 2015, but he played for the Davidson County team that is closer to his home this summer.
“Last year I asked Davidson County for a release to go play for Rowan with some of the other Stallions and they gave it to me,” Jarrett said. “This year, with the gas involved and the driving time involved, I felt like the best option was to stay with Davidson.”
Homeschool Stallions Hunter Shepherd, Sawyer Strickland, Dalton Lankford and Seth Cauble were instrumental in the success of the Rowan County American Legion team this summer. There were games when all four started.
Jarrett faced Rowan a few times and pitched against his buddies.
“It was a little weird, but I tried to treat it as just another baseball game,” Jarrett said.
Jarrett has been groomed as a pitcher for years. He was taking lessons from Greg Suire, president of the High Point-Thomasville HiToms, when he was 9 or 10.
Suire taught Jarrett how to throw a circle change, the pitch that made Tom Glavine a Hall of Famer. Jarrett also uses a sinking, two-seam fastball and a slider to get hitters out.
“I work off my fastball, but the circle change is my best pitch,” Jarrett said. “I try to work fast, throw a lot of strikes and keep my defense involved in the game. I don’t get a lot of strikeouts (47 in 60 innings for the Stallions), but I get a lot of weak contact early in the count.”
Jarrett plans to major in sports management at Pfeiffer. His long-range goal is to get involved in the business side of baseball or become a coach.
“Noah was there from the start for us and always was a very consistent pitcher,” Coach Lankford said. “He loves the game, and I have no doubt that he’ll be a great coach someday.”