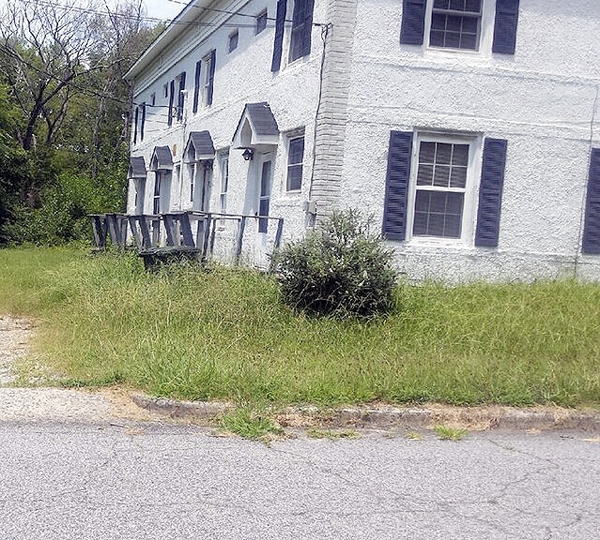 Submitted photo Cynthia Stanfield spoke during a city council meeting about her difficulties getting the lawn mowed at a property next to her. To the left of the bush, a city trash bin almost covered by the grass can be seen.

SALISBURY — Cynthia Stanfield taught social studies up north before moving back to her childhood home in Salisbury to retire.

She enjoys working in the garden during her free time, but the overgrown lawn of the property next door stopped her.

The property on the 300 block of Grim Street is an abandoned apartment building that went into foreclosure. Stanfield said the bank gave up maintaining the property.

“As a result it is just blighting my sights every day,” she said.

Stanfield talked during the public comment period at a City Council meeting last Tuesday and described her problem with getting the lawn mowed on the property.

In a picture Stanfield took of the property, the grass almost covered a city trash bin.

Stanfield said she was afraid of the animals that might have been living in the grass.

“I’ve had people put lime down because I don’t want to see a lot of snakes and varmints and everything,” she said.

She later said looking at the overgrown lawn every day dampened her spirits.

“It had just started to weigh on me,” she said.

Stanfield met with three code enforcement officers, and each time she had to wait even longer to get anything accomplished. She later said she had been trying to get the lawn mowed since the end of March.

She asked the council about the retention rate of the code officers and whether they were actually enforcing the code.

“I would have never thought that I would, at this age, be fighting with city government for something so simple as to maintain the grass so I would not be confronted with the blight of that property,” she told the council.

Mayor Pro Tem Maggie Blackwell asked City Manager Lane Bailey if he could have someone visit with Stanfield the next day. Bailey said he would do that and also have Assistant City Manager Zack Kyle meet with her.

Stanfield had called council member Kenny Hardin earlier that day, and he was the one who recommended that she speak before city council.

Later in the meeting, council member Brian Miller asked Bailey whether the city had hired someone to fill the vacant code enforcement director position.

Janet Gapen, Planning and Development Services manager, said the department posted the position for a senior officer a few weeks ago but is in the process of reposting it.

“We’re looking for a talented individual and had several applicants but wanted to adjust slightly and repost that position,” she said.

Gapen also mentioned that there are currently only two officers who each cover one half of the city.

“They’re not only responding to citizen complaints, but when they’re out in the field they have patrolling areas,” she said.

The council members and mayor said they had received complaints about code violations from citizens.

Hardin said some of the areas around the city that are not being maintained may be causing environmental issues.

The usual procedure for dealing with overgrown grass on a property starts with an investigation by code enforcers to see if the grass is over 12 inches. A notice of violation is then sent to the owner and tenants, and they have 15 days to comply. If that does not happen, the city sends a contractor to mow the lawn and an invoice is sent to the owner for the work. The city files a lien at the tax office if that invoice isn’t paid after 10 days.

The property next to Stanfield’s house was mowed on Wednesday. They also boarded up the building’s broken window. Stanfield said she was thankful for the city council’s quick response, but she isn’t sure how often the property will be maintained.

“In a city of this size, two code enforcers are not enough,” she said.

She said she knows there are other problems going on in the city and, having been a social studies teacher, she knows how slow government can work.

But she does expect her problems to be addressed, too.

“When I do voice my opinion, I expect to be heard,” she said.