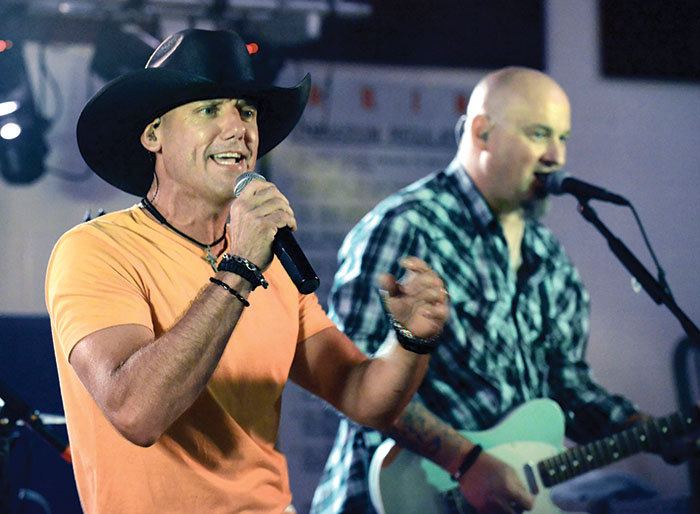 Darrell Harwood and band member Eric Upton along with the rest of the band entertain the Special Olympics particpates in a free concert for the particpants on Sept. 11, 2014. photo by Wayne HInshaw, for the Salisbury Post

CHINA GROVE — Darrell Harwood of China Grove won the award for country male singer of the year at the Carolina Music Awards ceremony Saturday at Fletcher Opera Theater in Raleigh.

“I thought that was pretty cool,” Harwood said Monday afternoon. “I’ve been fortunate.”

He attended the ceremony with his wife, Karen, and daughters Tayler and Sarrah. “My oldest daughter started to cry,” he said.

Harwood, 45, son of Sharon and Ronnie Harwood, grew up hearing his father sing. He put on his own first performance in May 2010 at a fundraiser for his brother-in-law, who had cancer.

Evidently a lot of folks liked what they heard. “It blew up,” he said, with increasing requests for him to sing at festivals and other events. His family and fans have been supportive.

Harwood does about 130 shows a year with his band, which consists of Eric Upton and Chip Coleman on guitar, Chad Talbert on bass and Junior Howell on the drums.

They have talked about recording an album, but Harwood stays busy with his day job. He has worked 20 years for Carolina Products in Charlotte.

Harwood loves to perform, and he followed Saturday’s awards ceremony with a special event on Sunday — a show for Special Olympics athletes, held at West End Plaza. “Those kids’ll break your heart,” he said.

Harwood was up against several other singers for the award. This was his first nomination, and he said he has yet to find out who nominated him.

Rock Band/Group – The Reason You Stayed