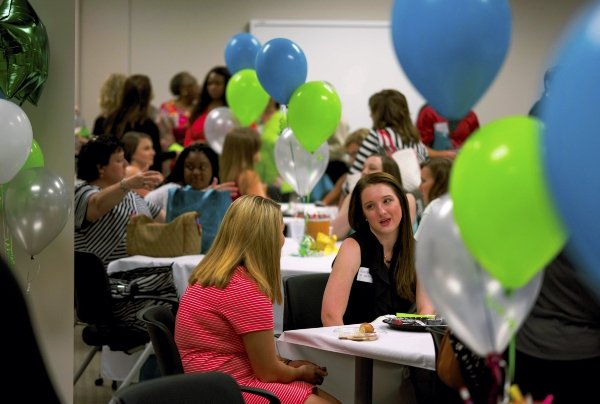 The annual new teacher breakfast, sponsored by the Rowan County Chamber of Commerce, served as a community introduction to the approximately 75 teachers who will call Rowan-Salisbury Schools their home for the first time this year.

Chamber sponsors set up tables in the Wallace Educational Board Room, offering goodies and services to those who may be new to the area.

“We want to make sure they have resources throughout the county,” Wilson said.

Many teachers were new to the area, and Wilson said she was there to help with everything from healthcare recommendations to the best beauty salon.

Emily Huffman, with Rowan Helping Ministries, said that she was there to help spark ideas for projects.

“We have a lot of volunteer opportunities for youth,” she said.

Huffman also handed out information that could help teachers identify students and families who may be eligible to use the ministry’s services.

Sandy Ku has nine years of teaching under her belt, but it’s her first year in Rowan-Salisbury. Ku taught first grade in Cabarrus County, but this year she hopped the county line to teach at Granite Quarry Elementary. Ku said she moved because her family found the perfect house in Salisbury. But it also meant Ku had to move her classroom.

“I moved two households,” she joked.

Larry Richardson will be starting as a social studies teacher at Henderson Independent High School. He’s not new to the school, but it’s his first year teaching. Robinson worked as a secretary at the school for three years prior. But he’s ready to move on up.

New teachers have training this week, but Tuesday morning they got to take a break and listen to welcomes by Janet Spriggs with the Chamber of Commerce, Superintendent Dr. Lynn Moody and the 2015 Teacher of the Year Nancy Goodnight.

“You re-energize each of us,” she said.

But the theme of the day was that teachers can change the world.

“We know that you teachers change the lives of your students every day,” Spriggs said.

She quoted Nelson Mandela, “Education is the most powerful weapon which you can use to change the world.”

It was a thread that Goodnight picked up as she talked about her feelings being named Teacher of the Year, and her recent experience in South Africa, where she learned about the country’s culture and education system.

“Ten years ago I was sitting right where you’re sitting today,” Goodnight said.

“You need to dare to dream big,” she said.

While visiting South Africa, Goodnight said she was blown away by the commitment she saw to education — the dedication of teachers, and the sacrifices parents made to ensure their child went to a good school.

“You can never underestimate the power you have to change a life that may change the world,” she said.

Goodnight recalled that while she was there, she stood on the same spot where Nelson Mandela cast his first vote in a free South Africa. She said she wondered if she could do something as important, as revolutionary. But then she realized that changing the world is something teachers do, every day.

“Your role is just as important because you have the power to change lives,” she said.