A veteran and her service dog need your help 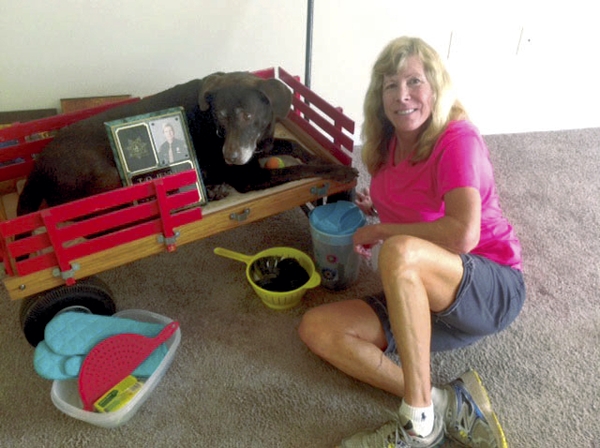 SALISBURY — I don’t quite know how to approach this subject. I could be helping put Maggie to her death.

I received an email Monday from Anna Jenkins, an Army veteran and former police officer I wrote about in May.

Through the help of many agencies coming under the umbrella of the Rowan Homeless Veterans Housing Task Force, Jenkins had been able to move into an apartment in Salisbury at The Villas at Hope Crest, a 55-and-older community.

Anna had been homeless for quite a while, and since she was needing permanent shelter, so was her devoted service dog, Maggie.

The Homeless Veterans Housing Task Force, which is doing good work, celebrated when things worked out for Jenkins and Maggie to be placed in the Salisbury apartment.

Jenkins told me back in May that Maggie was full of cancerous tumors and dying. The chocolate Labrador was having difficulty walking. When they were still in Charlotte, law enforcement officers there had collected money to pay for a wagon to help with Maggie’s mobility.

“It is time to put her down,” Jenkins wrote. “I don’t have the funds to do it. … I am begging you to reach out there and see if  I can get assistance.”

I called Jenkins later in the day, and she said she contacted three veterinarian clinics, including the one Maggie regularly goes to, and the costs for putting her down ranged from $383 to $800.

I can’t vouch for those numbers — they could be way off — but whatever the cost, Jenkins can’t afford it.

“There’s absolutely nothing I can do,” she said. “It’s really tight. I’m at my wit’s end. She still takes her pain meds, but they’re not working. She’s alert, but her body has just given up on her. The masses have gotten huge.”

Jenkins says when Maggie tries to walk, it’s as though she’s a drunken soldier. She also has trouble going to bathroom, and she doesn’t want to go outside any longer.

Maggie is 14 1/2 years old. She and Jenkins have been together since 2005 when Jenkins, then a contractor with U.S. Bomb Dogs in Washington, D.C., took a 16-week training course with Maggie, a bomb dog for the Federal Reserve.

Later, Maggie would become an official service dog, helping Jenkins with her post-traumatic stress disorder and depression. Jenkins also has battled a twice-broken right femur, weakened by osteoporosis. In January, she suffered a small stroke.

Maggie has been Jenkins’ constant companion and protector through all the physical ailments and homelessness.

“She’s my partner,” Jenkins says. “She’s like a kid to me. There’s no smarter dog out there in the world.”

When it comes to putting Maggie to sleep, Jenkins stressed she did not want any money to go to her directly. She would like the euthanasia of Maggie to happen at her veterinarian’s office, if possible. Jenkins has been taking Maggie to Lazy 5 on South Main Street.

“I don’t know where else to turn,” Jenkins said.

Yesterday: First-graders at Henderson School in 1934