Yesterday: First-graders at Henderson School in 1934 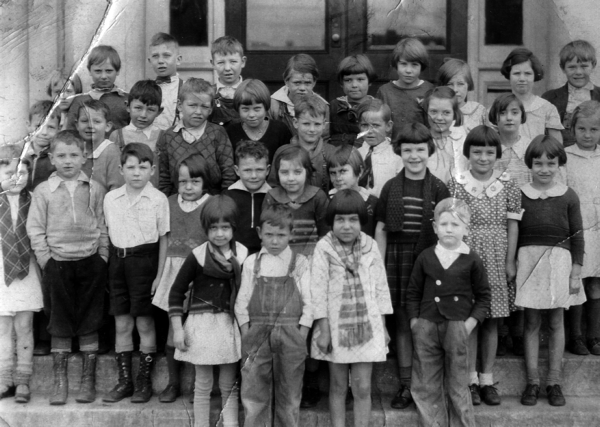 Sally Sedberry Helms provided this photograph to the Post. It shows her first-grade class at Henderson School in 1934. The photo was taken on the school’s front steps, and Helms’ class was one of two first grades at the school. Most of these kids attended first through sixth grades at Henderson, seventh grade at Wiley School and eighth through 11th grades at Boyden High. Helms says her 1945 class at Boyden (today’s Salisbury High) was the the last at the school to graduate in 11 grades. Helms can identify several of her classmates in this group photo. In the first row are Doris Kluttz, two children she can’t name and W.R. Poteat. The second row, left to right, are Betty Jo Owens, Sparky Goodson, Buddy Ludwig, Dot Loflin, Gerald Blalock, Sally Sedberry (Helms) herself, Betty Butler, Billy Marsh, not known and Betty Rose Conley. Helms knows only two of the children in the third row. Frank Cain is the boy second from left, and Betty Monroe is the last girl on the right. In the top row, Helms identifies only Joanne Surratt, a girl in the middle (below the doorknob).