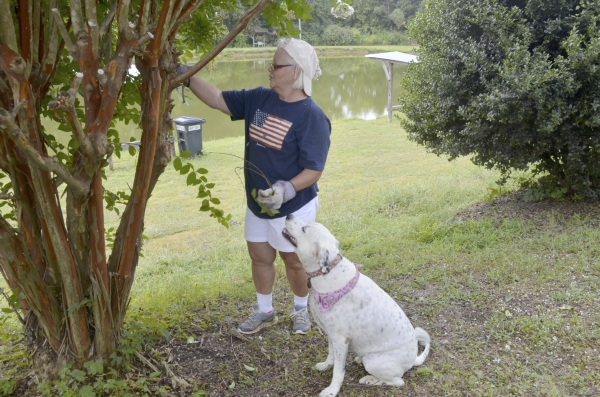 Not many people know that Salisbury has its own Golden Pond.

That would be Golden Pond Campground in east Rowan, where owner Glenda Bean has lived for seven years on the property she bought a decade ago. She came to North Carolina from Honduras, where she was a missionary with her ex-husband. They bought the property as an investment, but then she became single again and needed the income and has kept it running ever since.

There are two ponds on the property that contain carp, crappie, catfish and other types of fish. Fishing tournaments used to be held there, but now people just fish recreationally.

There is a three-fish per day limit for the amount visitors can take home, but for the most part most people just catch and release. Fishing in the ponds is not just for the campground tenants. They have outside fishermen come in regularly to fish in the ponds as well.

There are nine ducks, considered the “mascots for the park,” that the Beans’ granddaughter helped raise from ducklings. They were raised in a bathtub until they got their white feathers and then were released into the ponds.

“We have people come out here just to feed the ducks,” Glenda said.

Glenda runs the campground, located at 1045 Keener Place, off Goodman Lake Road, but receives help from Cande and Richard Keuper, who came to North Carolina from Arizona to be closer to their daughter and grandson.

“We were first at Bass Lake. It was in our membership to travel cross country. We picked there because it was very close to our daughter and our grandson,” Cande said. “But then we were unhappy with that park so we started looking around and we just fell in love with this one. It is so quiet.”

The Keupers have lived at Golden Pond for seven years, and Cande serves as the campground’s manager. They’ve been property managers for 35 years and just celebrated their 44th wedding anniversary in July.

“Way back when, in ’72 when we got together, we used to joke about getting old together and sitting on the front porch. And here we are,” Cande said with a laugh.

There are a total of 14 spaces for RVs, fifth wheels and motor homes along with two houses available for rent.

“All you hear, day or night, is mother nature,” Richard said.

Behind the Keuper’s home there is a shower, washer and dryer for tenants to use.

“Very sweet, friendly, kind people here. Very kind people. I’ve made two of the closest friends I’ve had in a long time here, Glenda being one of them,” Cande said.

The campground also has a pavilion where there have been weddings, birthday parties and occasional potluck dinners.

John Holder, originally from Staten Island, N.Y., has been at the Golden Pond Campground for a year. He and his wife, Louise Pickersgill, moved to NC for their retirement.

“I’ve been other places in the area and this place is the quietest,” Holder said.

He lived in Winston-Salem for 12 years and then moved out of state when his wife passed away in 2013. His wife, Louise Pickersgill, died just two weeks after her 68th birthday.

Holder moved back to North Carolina in 2014 and stayed at a different campsite before he found Golden Pond.

“If you want peace and quiet, this is the place to come to,” Holder said.

A couple of his hobbies include taking award-winning pictures and fishing, which he has been doing for about 50 years. He started photography when his daughter was born 47 years ago.

Holder has been a member of Piedmont Photo Club for three years. The group meets at Science Works in Winston-Salem.

Both Holder and Cande said Glenda is one of the nicest people they know.

Both Cande and Glenda are members of Trading Ford Baptist Church, which is within walking distance for them. They also enjoy going to a nearby gas station with a deli and ice cream.

“But that’s what’s so nice. We’re close to church, it’s only 12-15 minutes to Walmart and everything from here,” Cande said.

You bring your own RV to stay in while visiting the campground. The campground does allow pets as long as they are leashed.

According to Cande, they are working on creating a specialized drive-through section for more short-term visitors.

“Most people don’t know about it and it makes it hard to find. But it’s a gem,” Cande said.

Cande had antiques given to her by her father, who was an antique dealer, and when she and Richard downsized she gave some things to her children and sold other things in a big garage sale.