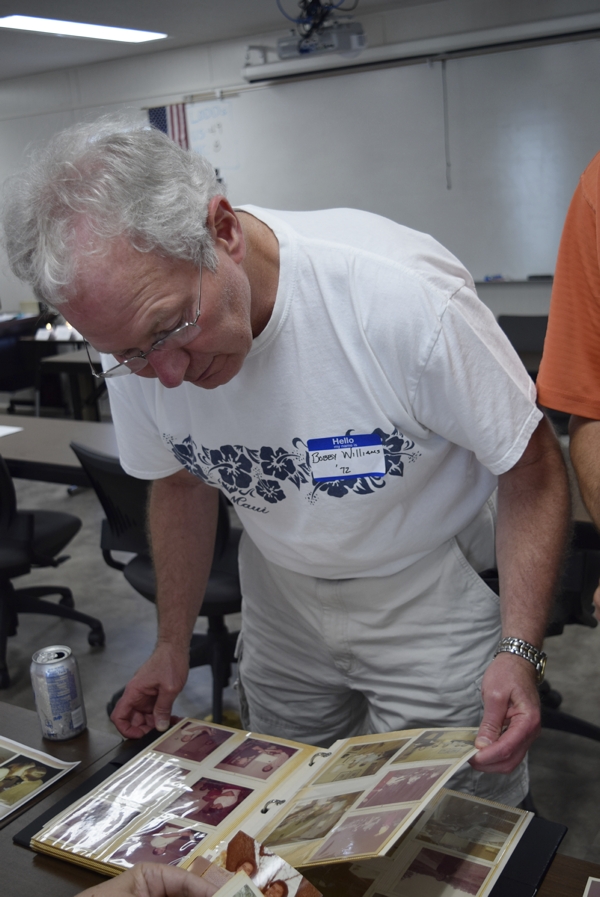 Bobby Williams, a graduate of RCCC's fire technology program, looks through old photos of the class. Williams flew in from Spokane, Wa., where he serves as the city's fire chief, to celebrate the program's 50th anniversary. Rebecca Rider/Salisbury Post

SALISBURY — The small group spanned 50 years. From Reggie Bauguess, who graduated from Rowan Technical Institute’s fire technology program in 1967 as part of its first class, to a fresh-faced firefighter, who donned a cap and gown in May.

Former graduates of the fire technology program came from all over — Texas, Arizona, Washington and Massachusetts — to celebrate its 50th anniversary Saturday. When Rowan Tech, as Rowan-Cabarrus Community College used to be known, launched the track in 1965, it was one of only three such schools in the country — and by far the cheapest.

Dan Peters, a graduate who now serves as a chaplain and fire protection specialist with the Salisbury Fire Department, said that students used to come from “up and down the east coast” to study fire science in Salisbury. For two years, they’d live at local fire departments, studying and learning from veteran firefighters. When they graduated, they’d go on to change the face of the nation.

But back then, they were just a tight-knit group of kids.

“We were a family,” Tim Davies, a former instructor, said.

The school had one small get-together before in the ’80s, Peters said, but this is the first time they’ve really pulled out all the stops. Peters joined the program from Pennsylvania, and has stayed in the area since. He and local graduates — who include Bob Parnell, chief of Salisbury’s fire department, and Mike Zimmerman, chief of Bostian Heights Fire Department — put Saturday’s celebration together.

“We took care of all of it,” Peters said.

But the day served as more than a time to share old stories. Peters said he, and others, hoped that younger students and graduates would see all of the possibilities studying fire technology could open.

“We’ve had a lot of success and it’s all built on this two-year program,” he said.

The small classroom at RCCC’s fire and emergency training grounds was full of fire chiefs, fire marshals, a county sheriff, engineers and renowned safety inspectors. One of the graduates included Bobby Williams, the current fire chief of Spokane, Wash., who flew in for the event.

Williams flipped through old pictures of his class, which graduated in 1972.

“We really melded together as a group of kids,” he said.

“It was a great program,” he said.

The program was shut down in the ’80s until the school started a new program in recent years. But graduates said it was impossible to work in fire service back then and not run into someone who had been through Rowan’s program, or who knew someone that had.

“We’ve changed the face of fire protection in this country,” one of the graduates said, “and I wonder how many lives we’ve saved.”

Another mentioned that loss of life in fires has gone down nationally, despite an increase in population. And now there are hundreds of fire programs across the country.

But the event was cheerful, full of laughter and jokes as graduates revived old pranks, nicknames and swapped stories about their days living at the South Salisbury Fire Department, or how six “Rowan Tech boys” went on to top class listings at Oklahoma State University. The group spent several hours sharing where they’d been since they graduated, or spoke up with updates about graduates who couldn’t make it.

But some just remembered.

“I’m not going to tell you where I’ve been since I left here,” Davies said, “What’s important is that I was here.”