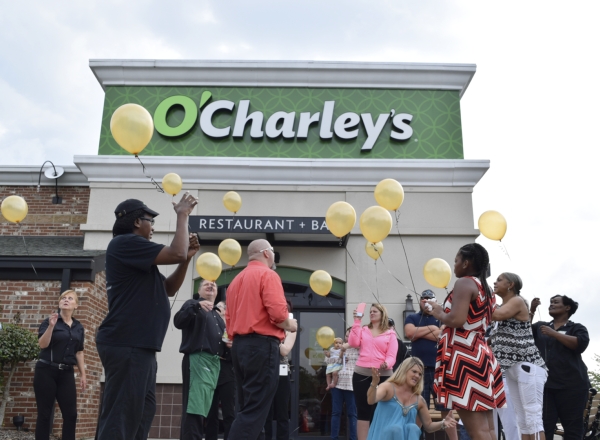 Family, friends and co-workers gathered at the workplace of LaCynda Feimster Sunday morning to remember her and celebrate her life. Feimster, who was known to friends as "L.C.," was killed in durng a May home invasion. Co-workers described her as a warm, joyful person and a "dear friend." Rebecca Rider/Salisbury Post

SALISBURY — It was a tearful group that gathered in front of O’Charley’s Sunday morning to honor Lacynda Feimster.

“Today is really just going to be a day to remember her,” Jason Ceibers, general manager, said.

Feimster, 38, who worked at the restaurant for several years, was shot inside her Crowne Point Drive apartment during a May 24 home invasion. She was pronounced dead at the scene.

The remembrance ceremony was a time for Feimster’s co-workers to celebrate her life and gain closure after the loss of someone who many considered to be a dear friend.

“We’re trying to get back to what this restaurant is really about … but the hurt is still there,” Ceibers said.

“She was everything to me,” Green said.

Gregory was in the home on that fateful day and was struck in the face by a gun. She said she’s still learning to cope with the loss.

“I don’t know why someone would take my daughter from me,” she said.

Sindy Lina Abbitt, 33, turned herself in to the Rowan County Magistrate’s Office on June 23. Abbitt was charged with murder.

But Sunday morning, those who knew and loved Feimster, who often went by “L.C.,” chose to focus on and celebrate her life. The group went outside for the unveiling of a plaque Ceibers had made in Feimster’s honor. Affixed to a boulder near the restaurant’s entrance, the plaque promises that “because of her heart of gold, her memory will never end.”

Abrams said that Feimster was “the glue that held a lot of the staff together.” Others described her as a dedicated friend and caring mother, who helped cheer and encourage those around her.

“At the end of the day she was a ball of joy,” Ceibers said.

Rena Ogle, one of Feimster’s co-workers, said that Feimster always came into work with a good attitude, and could lift everyone’s spirits.

“She made even the greatest days sunshine,” she said.

Co-worker Sonya Roberson said that Feimster was a mother figure to many people at the restaurant.

“She was family,” she said.

During the unveiling, Ceibers encouraged staff to stop by the plaque if they were having a bad day — to remember Feimster and borrow some of her strength and joy. He called Feimster “someone that we loved dearly.”