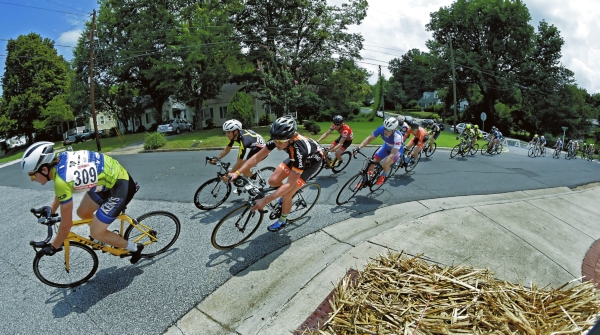 Category Cat "3" bikers race up N. Jackson Street onto Club Drive in the Carolina Class at the City Park. photo by Wayne Hinshaw, for the Salisbury Post

SALISBURY — Bicycle racers whizzed around a mile-long loop of Salisbury City Park Sunday, despite climbing temperatures. More than 450 cyclists competed this year in the 2016 Crossroads Classic, a four-day race at four different locations around the Piedmont.

“We’ve had a good series for sure,” he said.

The Crossroads Classic has been in business for 16 years, and Sunday marked the 14th year the race has partnered with Salisbury for its grand finale, as cyclists race the clock to increase their laps. The race started Thursday in Mocksville and finished Sunday at City Park. Streets around the park were blocked off for the cyclists, led by a competition car to keep the pace as they looped around the green. It’s the second year the Crossroads Classic has lasted four days, instead of the original five, Boyd said, and this year the race brought back its popular sprint competition.

Boyd said both the cyclists and the race itself love coming to Salisbury. Over the years, the Crossroads Classic has built up a good relationship with local police and fire, and Boyd said the town is always welcoming.

For the cyclists, Salisbury’s course is a welcome change.

The other three locations — held this year in Mocksville, Statesville and Asheboro — are half-mile courses in downtown areas. But the City Park loop offers some welcome greenery and a bit of an extra challenge — it’s nearly a mile long, and has a double-slope hill leading up to the finish line. But Boyd said most cyclists consider that to be an added plus.

“We love coming here,” he said.