US men romp past China in Olympic basketball opener 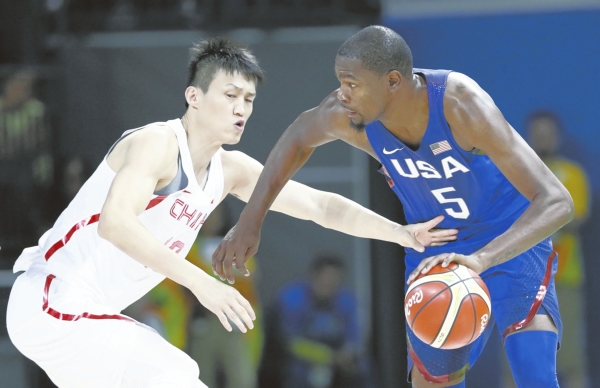 Durant picked up right where he left off in the 2012 Olympics with 25 points, and the U.S. men’s basketball team routed China 119-62 on Saturday night in its opening game.

The new Golden State Warriors star scored 30 points four years ago in the gold-medal game, when the Americans held off Spain for the championship. Only he and Carmelo Anthony returned from that team, but the new guys were plenty ready for their Olympic moment.

“We just wanted to send a statement to the rest of the world,” Anthony said. “Come out this first game and let everybody know that we’re focused, we’re locked in and we’re about business on this trip.”

DeMarcus Cousins added 17 points and Paul George 15 for the U.S., which is a heavy favorite to win a third straight gold and won’t change any opinions after this performance.

LeBron James and Chris Paul passed on searching for more gold with Durant and Anthony, and plenty more top players who would have been on this roster also declined. But coach Mike Krzyzewski said this squad has already bonded as much as any of the three U.S. teams he has led in the Olympics.

“Just because they aren’t here today, we’ve got another batch of guys that’s walking around on the streets saying they want to win a gold medal and we all have something in common,” Durant said. “It’s cool to have a fraternity of guys who have won a gold medal. It’s rare.”

Durant was 10 of 14 from the field and made five 3-pointers.

“When you get hot, you want to see your bench get excited for you,” Durant said. “That’s better than making the shot, to be honest with you. When I saw my teammates get excited for me, that kept me going.”

Tougher competition might come later, but it should be an easy start for the Americans. They play again Monday against Venezuela, another team they beat easily in exhibition play.

Anthony finished with nine points and made by history becoming the first U.S. male to play basketball in four Olympics. He will become the first three-time gold medalist on the men’s side if the U.S. wins.

The 32-year-old veteran tied LeBron James and David Robinson by playing in his 24th game in the Olympics.

The Americans beat the Chinese twice in exhibition play by scores of 106-57 and 107-57, and this one was even less competitive.

Former NBA lottery pick Yi Jianlian had 25 points to open his fourth Olympics. No other players were in double figures for the Asian champions.

“As a matter of fact the result of this game was already kind of expected before the game even started,” China coach Luming Gong said through an interpreter.

Durant, Anthony, Cousins, Kyrie Irving and Klay Thompson started the game for the Americans, and all 12 players scored. They had 31 assists on their 38 baskets.

The Chinese got on the board first with a pair of free throws, and it was tied at 4 after a basket by Yi. Then it was nine straight points for the Americans, who closed the first quarter with a 26-6 burst to lead 30-10.

DeAndre Jordan shook the backboards inside Carioca Arena 1 with some of his powerful dunks, DeMar DeRozan had a couple, and in case the dunks were too easy, Irving knocked in four 3-pointers in the second half for his 12 points.

There were flags waving and fans singing, the festive scene in the stands more interesting to watch than the game that wasn’t competitive after the first few minutes.

The U.S. was favored by about 50 points, so it wasn’t supposed to be close.

If the Americans keep playing like this, the Olympic competition may not, either.