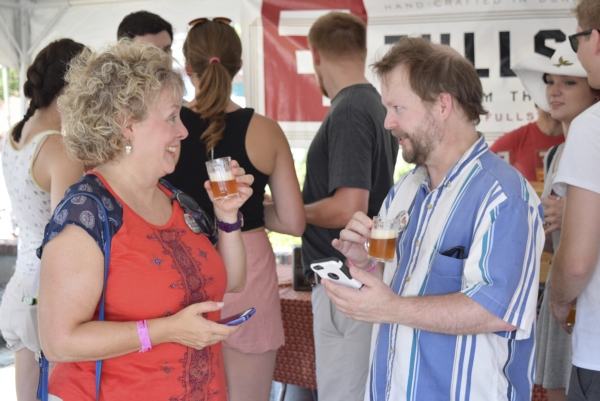 But the parking lot behind the Gateway Building on N. Lee Street was crawling with craft beer enthusiasts. Those who purchased a $20 ticket to get in went booth to booth, passing an empty souvenir tasting glass to representatives from local breweries, who handed it back full of a brewery classic.

“Of course, it’s hot,” she said, “but everyone’s got a great attitude.”

Summer Sip staff had spoken to people from Lexington, Winston-Salem and even as far away as Texas, showing that the event had regional as well as local draw, Bohland said.

John Olson came down from Winston-Salem to experience Summer Sip. Olson brews beer at his home as a hobby, and said he likes to experiment with unusual flavors like smoked tomato and Vietnamese persimmon. He and friend Leigh Strickland were enjoying the range of options offered by the festival.

“We love the event,” Strickland said. “I wish it was cooler.”

Temperatures Saturday exceeded 90 degrees, but that didn’t stop long lines from forming for a taste of local, craft beer.

“These events always remind me of all the cool stuff we have downtown,” Smeltzer said.

Smeltzer works in Charlotte, but said he and Ellis choose to live in Salisbury because of all the downtown and community events.

At New Sarum Brewing Company, one of Summer Sip’s sponsors, people lined up and came back for more, looking for a taste of one of the ten beers the brewery had on tap.

VIP ticket-holders got a tour of New Sarum, as well as a cheese and beer tasting.

Under a tent, another local brewery, Morgan Ridge, attracted crowds with its Chocolate Cayenne Imperial Stout. Brewmaster Nikki Koontz said the company has gotten positive feedback about its beers, as well as its anticipated opening of the Morgan Ridge Railwalk Brewery and Eatery at 421 N. Lee St.

After Summer Sip came to a close at 7 p.m. Saturday, brewery representatives were invited to an after party at New Sarum.