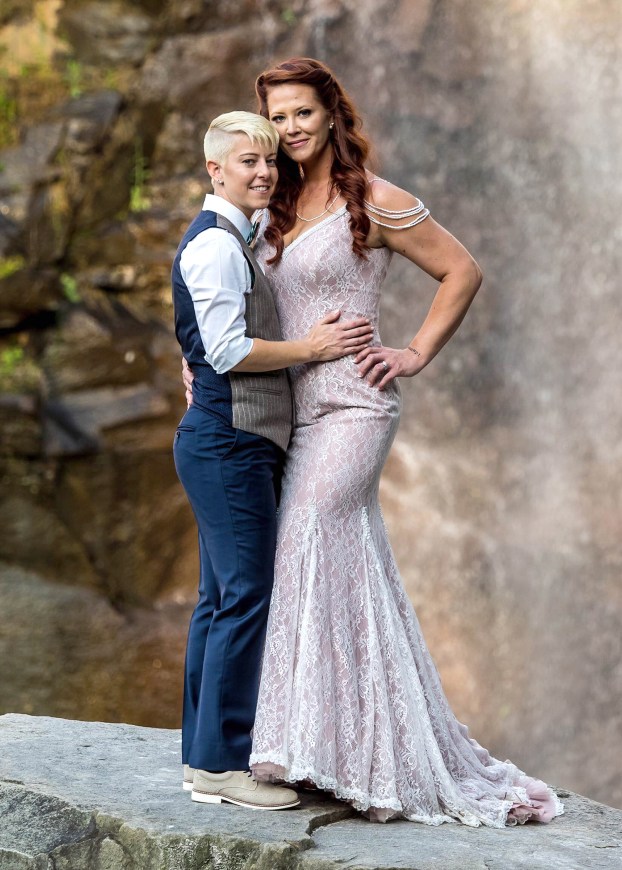 Meridith Clawson and Emmie Patterson were united in marriage on Saturday, May 7, 2016 at The Quarry at Carrigan Farms in Mooresville. Pastor Nathan King, of Trinity UCC in Concord, officiated the 6 p.m.ceremony, which was followed by a reception with dinner and dancing.
Meridith is the daughter of Michael and Francine Clawson of Salisbury and Caroline and Tom Greene of Spencer. Emmie is the daughter of Nancy Patterson of Gastonia. Meridith was escorted by her father and attended by her cousin, Beth Archie as maid of honor; Mackenzie Price; Stacey Wood; Brittany Lazar, sister of the bride; Erica Potts; and Thomas Porter Baker, brother of the bride. Emmie was escorted by her mother and attended by Dana Eidt, sister of the bride, as matron of honor; Wendy Hamilton, Julie Griffin, Laura Summerlin, Tasha Rash and Ashley Kelly.  Meridith and Emmie would like to thank everyone who attended the wedding in love and support.
Meridith is a 2005 graduate of Randolph Community College where she studied commercial photography and a 2007 graduate of the University of North Carolina at Greensboro, where she earned a bachelor’s degree in communications studies. Emmie is a 2001 graduate of Lees-McRae College, earning her bachelor’s degree in biology and a 2005 graduate of Carolinas College of Health Sciences in medical technology. She is a medical technologist with the American Red Cross.
The married couple celebrated their honeymoon in San Francisco and Napa Valley and returned to their residence in Gastonia, where they recently purchased their dream home in the historic district. They live with their dog, Luckie, and look forward to starting a family in the future.

Joshua Price of Salisbury, earned a Bachelor of Science in Aerospace Engineering from the Georgia Institute of Technology in Atlanta,... read more