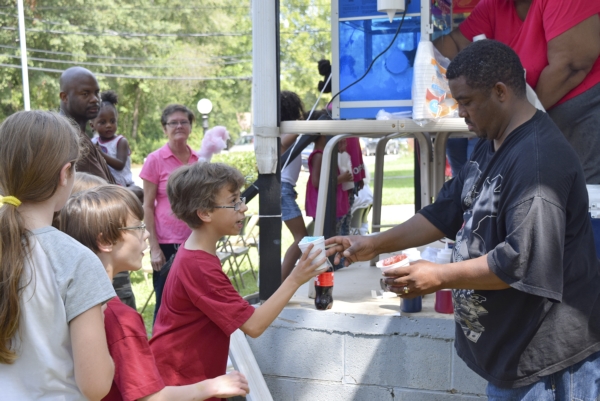 Lawrence Nicholson, right, hands out snowcones to those who attended the Refuge Church of God in Christ's back to school bash and school supply giveaway. Rebecca Rider/Salisbury Post

SALISBURY — On Saturday, one church broke out of its building, closed down a street and invited its neighbors to come celebrate.

“We really just want to love the people of the community,” Estelle Wright, first lady of the Refuge Church of God in Christ, said.

The Salisbury church closed down a block of Short Street for a “community fun fest,” its third such event this summer. The church has served the Short Street community for more than 40 years, when Wright’s father came to the area and gathered a congregation. But recently, Wright said, the congregation has wanted to move “beyond the walls” of the church and reach out not just to its home neighborhood, but to the people of Salisbury.

And it’s a way to show that “God is not just for us, he’s for everyone,” she said.

It’s a move that played right into Mary Wilson’s passion. Wilson is the church’s community outreach director, and the main organizer of this summer’s fun fests. The bash was “fun for everyone” and featured free food, live music, bouncy houses for the kids and several giveaways.

Nearly 100 people from every walk of life attended Saturday’s bash — which really showcased the heart behind the event, Wilson said. Wilson said she hoped the event would bring people together, despite their differences, and allow them to “fellowship freely.”

The church also hosted a giveaway. Letting those who attended peruse tables of gently used clothing, and handing out gas cards, 14 free tickets to Carowinds and approximately 70 bags of school supplies.

For people like Shannon Jackson, it was a blessing. Jackson has five children, four of whom are in school, and said that school supply costs can pile up.

“It’s hard on all of the parents that have so many kids,” she said.

But Saturday, she was able to knock a few things off the list. And the community feel of the event, coupled with its activities for kids, was a plus. For Wilson, that’s what it’s all about.

“I just want the people to be happy,” she said.