‘All the Missing Girls’ a fast-paced summer thriller 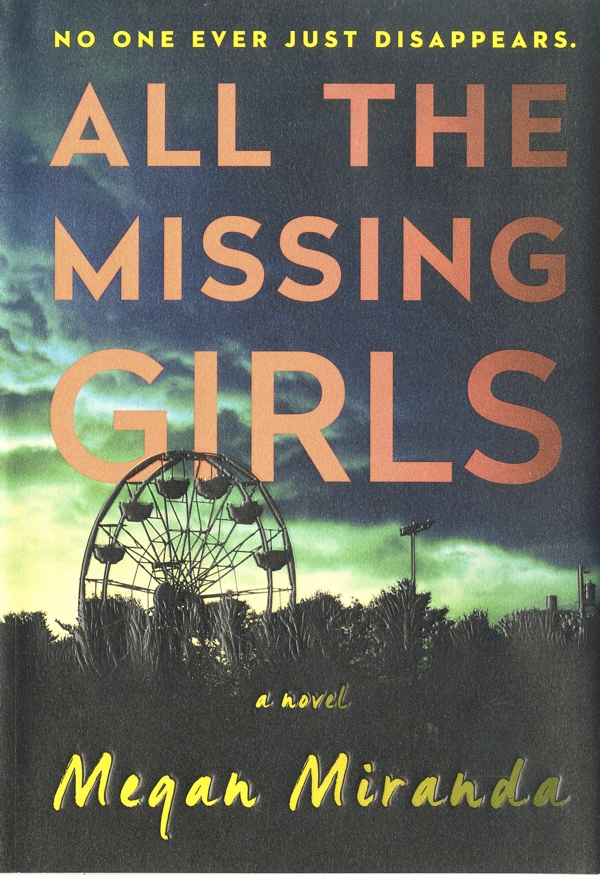 Summer’s not over, so if you’re looking for a quick thriller with more twists than a large DQ cone, “All the Missing Girls” is just the ticket.

It can be confusing and infuriating trying to remember what Nicolette Farrell does and doesn’t know as the book progresses. The question of who’s guilty constantly shifts, which is why you keep turning the pages. You’ll wonder, “And then what happened,” but it’s already happened, so you’ll switch to, “How did this happen?” And, as the book builds to a climax, you’ll shudder at what they know and how they reacted.

“All the Missing Girls” is fast-paced, emotional and dark. When all is revealed, it will leave the reader feeling a bit betrayed.

It begins with a letter from Nic’s father, a man suffering from dementia, that says simply. “I need to talk to you. That girl. I saw that girl.” Nic freezes at first. She does not want to drag up memories of her best friend Corinne’s disappearance 10 years ago, and she does not want to know if her father’s slipped further into unreality or if he knows something he shouldn’t.

She makes the long trip back home to the North Carolina mountains at her brother’s pleading. Their father, now in a nursing facility, is out of money. They need to sell the house. She has to get Dad’s permission. She resists and dreads the trip — “But here’s the thing I’ve learned about leaving — you can’t really go back. I don’t know what to do with Cooley Ridge anymore, and Cooley Ridge doesn’t know what to do with me, either.”

Miranda throws a cloak of respectability over Nic. She’s living in Philadephia, working as a school counselor. She is engaged to a respected criminal lawyer, Everett, and is looking forward to a life far away from her hometown and the secrets it holds.

She finds her father distant, unfocused, with moments of lucidity, but few and far between. He tells her he saw Corinne at the house. Nic doesn’t know if this a dream or a memory, but it’s dangerous, very dangerous.

For a while, the narration moves forward, just as you’d expect. Then it jumps to two weeks later and Nic notices signs for another missing girl, Annaliese Carter. The coincidence is deeply disturbing, especially since the girl was last seen with Tyler, Nic’s high school boyfriend. She’s also been seen with her brother Daniel.

Annaliese’s family’s  property backs up to Nic’s family’s. What’s between them? Woods. Woods with eyes and monsters and stories, Nic tells us.

Is her father involved in this new disappearance? Is that the girl he’s talking about?

And then Everett is in Cooley Ridge, advising people not to talk to the police, and Nic won’t leave until she knows what happened to Annaliese, the second missing girl in 10 years.

And then, Tyler is in the house, looking desperate, sirens wailing in the distance and Daniel is calling, telling them to get out and then Nic sees blood on Tyler’s hands and then …

Each chapter is the day before the previous chapter, so you’re in the know, but you have to remember what Nic doesn’t know as the story tracks back to the pivotal event.

Explosive? Yeah. Telling the story backwards allows Miranda to build suspicion on every character she introduces, misleading the reader again and again.

Since the first disappearance 10 years ago, the rumors have been wild, stories made up with few facts — incredible, wildly inaccurate, accusatory, damning facts, even to the innocent.

But is anyone here innocent? You might think so, or you might suspect the whole lot. The reader’s ideas of what happened will shift from chapter to chapter as you unlearn what you know and learn what’s hidden.

In this way, Miranda is terribly clever. But some readers may find it annoying. If you can stick with it, it’s a slam-bang end, full of crazy impulses and wild emotion.

When you’re finished, you’ll want go back and start over again to get it all straight, which makes it both maddening and fun.

The plot twists may stretch belief a bit, but by then, you’re drawn in to the story like an addict, waiting for you next hit of surprise.

Miranda, whose previous novels have been for young adults, displays a keen knowledge of teenagers and their messy lives. It’s easy for her to tell the stories about the night at the fair or the sexual jealousy that lurks in these hormone-laden kids.

The question becomes how responsible we are for each other, and at issue is the extreme emotional vulnerability of teens.

Do secrets make a family? How do you live with what you know?

The Friends of the Kannapolis Library will present Megan Miranda, who lives near Charlotte, on Saturday, Aug. 20 at 2 p.m. This is a free event.

The library is at 850 Mountain Street, Kannapolis.