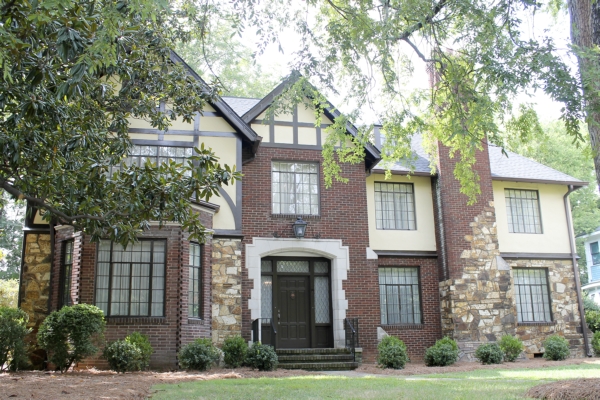 The South Fulton Street home were former U.S. Sen. Elizabeth Dole grew up will be on Historic Salisbury Foundation's OctoberTour for the first time on Oct. 8-9. The Tudor-Revival style home was built in 1937. Submitted photo

SALISBURY — The home of Elizabeth Hanford Dole, former U. S. senator from North Carolina and one of Salisbury’s most prominent citizens, will be on tour for the first time in OctoberTour’s 41-year history, according to Historic Salisbury Foundation.

OctoberTour patrons and ticket holders will have the opportunity to visit this house located at 712 S. Fulton St. and enjoy seeing one of West Square’s most beautiful residences.

John Wilbur Hanford, Dole’s grandfather, moved his family to the area and established the Salisbury Greenhouses in 1905. His son, John Van Hanford (1893-1978) later joined and managed the growing wholesale and retail family businesses. It was renamed J. Van Hanford and Son during World War ll, when Dole’s brother, John Jr., was serving in the Navy. Renamed a second time, Hanford’s Inc. grew to become one of the largest floral and gift wholesale distributors with national showrooms, and was headquartered in Charlotte as well as Salisbury.

Dole’s mother, the former Mary Ella Cathey, grew up in the South Fulton Street neighborhood with her parents, Cora Lee (Alexander) and Joseph Pinkney Cathey. She married John Van Hanford in 1917, brought up her family and became increasingly involved in the local community.

Mrs. Hanford was one of Salisbury’s most dedicated civic leaders, championing the American Red Cross, the Rowan Museum and historic preservation. She was a charter member of Historic Salisbury Foundation, and of the Foundation’s Andrew Jackson Society, an active member of the United Methodist Church, the National Society of the Colonial Dames and the English Speaking Union.

Elizabeth Hanford, a graduate of Duke University and Harvard Law School, served in a number of government positions including the Federal Trade Commission. She married U.S. Sen. Robert Dole of Kansas in 1975 and rose to national prominence as Secretary of Transportation in the Reagan administration.

Elizabeth Dole served as Secretary of Labor in the George H.W. Bush administration, and eight years as president of the American Red Cross. She ran briefly for the Republican presidential nomination in 1999. Three years later, Dole was elected U.S. senator from North Carolina, serving from 2003 to 2009.

In 2012, she founded Caring for Military Families: The Elizabeth Dole Foundation to raise awareness and support for the 5.5 million young spouses, mothers and dads caring for America’s wounded warriors at home.

In addition to being historically significant, the Hanford-Dole House is architecturally notable as one of the few Tudor Revival style houses in Salisbury. The two-and-a-half-story house was designed by prominent Charlotte architect William H. Peeps. The asymmetrical exterior is a decorative combination of stone, brick, stucco and half timbers, artfully executed in the Tudor style. The interior features a graceful curved staircase and Tudor arches. The interior remains true to its original design other than the 1970s addition of a downstairs master bedroom suite.

The house contains two antique secretaries from the Cathey and Alexander families. Mrs. Hanford was particularly proud of the dining table and chairs made by Fred Craver, a cabinet maker from Davidson County who was a favorite of hers. Craver also made the teester bed in the master suite, twin poster beds in a guest room, and numerous tables and chairs throughout the house.

OctoberTour 2016, scheduled on Oct. 8 and 9, will feature a wide array of architectural and interior designs with this year’s homes in addition to the Hanford-Dole House.