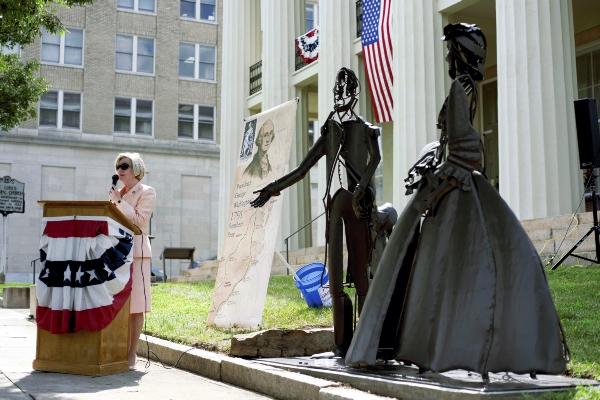 Salisbury Mayor Karen Alexander dedicates a new sculpture in front of the Rowan Museum depicting the visit of George Washington to Salisbury during a tour of the southern states in May of 1791. The steel sculpture by Black Mountain Iron Works' Dan and Tekla Howachyn includes three lifesize figures featuring one of the first President with his hand extended. Jon C. Lakey/Salisbury Post

SALISBURY — Citizens and visitors of Salisbury will be able to shake George Washington’s hand thanks to a new sculpture at the Rowan Museum.

The permanent sculpture sits in the lawn of the Rowan Museum, at 202 N. Main St., next to North Carolina Highway Historical Marker that recognizes President George Washington’s visit to Salisbury in 1791.

Before a reception on the museum’s porch, a few people spoke to a crowd of about 20.

Barbara Perry, chair of the public art committee, said the sculpture was the 12th one for the city.

Perry said they commissioned the piece for the 225th anniversary of Washington’s visit, which was celebrated in May.

Terry Holt, president of the Rowan Museum Board of Directors, said the sculpture will serve as a reminder of the parents who brought their children to see Washington as he visited the town.

“We have come not just for art’s sake, but to open our eyes and hearts to an event from 225 years ago,” he said.

Holt acknowledged that Washington owned slaves as a farmer and later freed his personal slaves, but said the fact that Washington made his wrongs into a right was an example all can follow.

“Our hearts as Americans should be to hear and listen to each other’s stories, the good and the not so good,” he said. “That is the purpose of the Rowan Museum.”

James Meacham, executive director of the Salisbury-Rowan County Convention and Visitors Bureau, said he is thankful to be a part of a city that embraces the cultural community.

He also said that the CVB has helped purchase art for the city in the past and is committed to purchasing art for the next five years.

Mayor Karen Alexander officially dedicated the sculpture on behalf of the City Council and city.

“While the sculpture we are dedicating today is a contemporary interpretation of the historical event, the figure of Washington greeting citizens is one that is easily recognized,” she said.

She thanked Salisbury native Karl Rimer for providing the seed funding for the project, the Salisbury-Rowan CVB and the Salisbury Public Art Committee for their work and funding. She also recognized Lynn Raker, an urban planner who recently retired from the city, Barbara Perry and Kaye Brown Hirst, former executive director of the Rowan Museum.

Janet Hammond, an intern at the museum, said she thought the sculpture would bring a lot of visitors to the city.

“I think that this will be a great draw for tourism because it’s a great photo-op,” she said.

The sculpture is close to the sidewalk and Washington’s hand is outstretched so that visitors can pose with the sculpture.

Artist Dan Howachyn said he and his wife made it that way on purpose.

The sculpture was made in the same style as another one of their sculptures called “Shopping Daze,” which is in Asheville.

To create Washington’s face, Howachyn said they looked at a dollar bill. They created the child holding a frog so that it could be either a boy or a girl, since both genders wore dresses as children during that time period.

Tekla Howachyn said they spent a lot of time researching the clothing of the period to model the sculpture after.

She said it was an “extreme honor” to be chosen to create the piece. Public art has the ability to lift spirits and add harmony to an area, even if it doesn’t appeal to everyone’s tastes, she said.

“It’s always an addition to a city to have public art,” she said. “Always.”