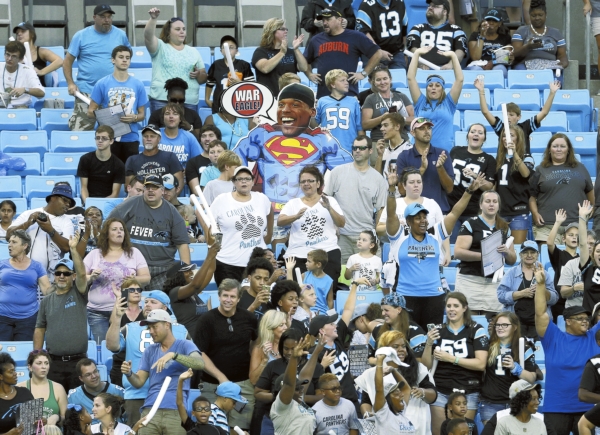 CHARLOTTE (AP) — Ron Rivera stressed a few years ago that he wanted the Carolina Panthers to become “relevant” in the NFL.

Put a big checkmark in that box.

Behind NFL MVP Cam Newton, the Panthers have become a hot ticket in the Carolinas and neighboring states — more so than ever. Following a third straight NFC South championship and a trip to the Super Bowl, fans are abuzz about the Panthers heading into 2016 season hoping the franchise’s first Vince Lombardi Trophy is close.

The Panthers “sold out” all 60,000 tickets — they were available for free online — in a matter of hours for their annual Fan Fest practice, which was held Friday night at their downtown stadium.

This week the team shattered its yearly training camp attendance record at Wofford College — and the camp isn’t even half over. Through their first seven practices the Panthers attracted nearly 80,000 fans to their practice facility in Spartanburg, South Carolina, about a 90-minute drive from their home base in Charlotte.

“When you have sustained success it creates more and more momentum,” Panthers President Danny Morrison told The Associated Press. “People around the country and certainly in the Carolinas have seen a very unselfish team — a team that loves playing football. And we have a lot of unique individuals.”

Few are unique as Newton, one of the more excitable, confident and entertaining quarterbacks ever to play in the NFL.

The sixth-year quarterback has become a polarizing figure to some who don’t particularly enjoy his elaborate touchdown celebrations or the way he bolted off the podium after Carolina’s 24-10 loss to the Denver Broncos in the Super Bowl. But he’s become the most popular athlete the Charlotte area has ever known.

Newton much owns all eyes in crowd when he steps on the field at Bank of America Stadium.

Near the end of practice, he made like a orchestra conductor to the crowd as he led “the wave.” He got fans to do the wave, slow, fast and backward. He even had it going in two different directions, all the while smiling from ear to ear.

Fans responded to energy with a chant of “MVP.”

“Nothing Cam does surprise me anymore,” said fullback Mike Tolbert with a smile.

Luke Kuechly is much more reserved than Newton, but no less loved in the Carolinas. When No. 59 makes was shown on the stadium’s videoboards, the crowd roared “Luuuuuuke!”

“When you have individual stars like we have that only adds to the excitement around training camp,” Morrison said.

Rivera said the players have been overwhelmed by the amount of fan support this summer. The team drew more than 22,000 fans for its first night of practice at Wofford College as optimistic fans anticipate a return to the Super Bowl — albeit with a different outcome.

“We love the support because it brings a lot of energy and the players feed off that energy,” Rivera said. “The tempo goes up and guys get really competitive.”

The team’s support has steadily increased since 2013, when the Panthers won the first of its three straight NFC South titles. Before that, the Panthers had never been to the playoffs in back-to-back seasons.

“My first year I came in here you could find a seat anywhere in the stands. Now it’s a packed house, so that’s great,” said fourth-year defensive tackle Star Lotulelei.

Morrison said the metrics the team uses to measure its growth in popularity — including social media, TV ratings and attendance — suggest interest in the team is at an all-time high. Much of that coincided with the arrival of Newton, the No. 1 pick in the NFL draft in 2011.

Morrison also attributes the growing fan base to what he calls “second generation fans.”

The Panthers entered the league as an expansion team in 1995, so it has taken some time to establish a fan base. But with the team headed into its 22nd season, many of the young fans who grew up watching the Panthers have now become adults and are raising their children as fans.

“Certainly that is making a big impact,” Morrison said.