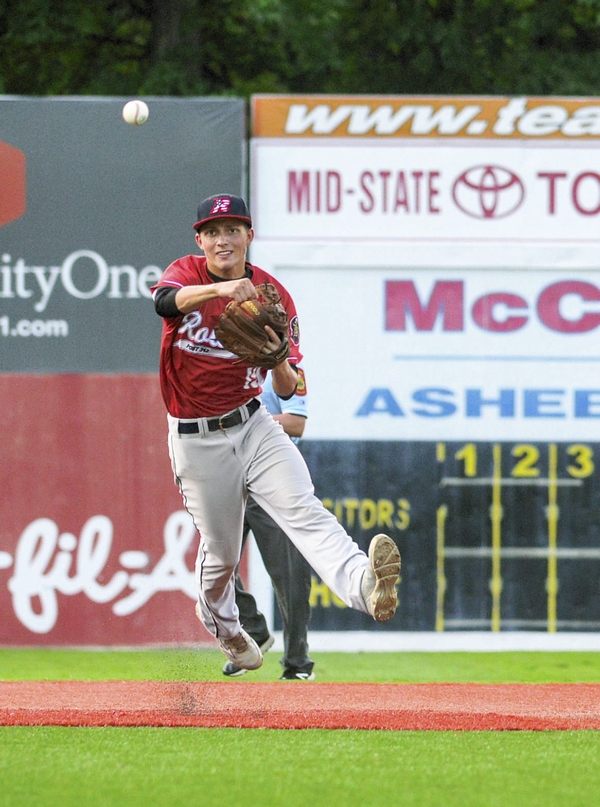 PJ Ward-Brown/For the Salisbury Post Rowan shortstop Dalton Lankford makes a running throw for an out in last night’s game against Randolph County in the Southeast Regional at Asheboro.

ASHEBORO — The gameplan was for Sawyer Strickland to start Game 4 in the Southeast Regional, but the audible that Rowan County coach Jim Gantt called worked out pretty well.
It won Game 3 for Rowan County. Strickland, a homeschooled right-hander who is headed to Catawba, was fantastic out of the bullpen, and Rowan County beat host Randolph County, 10-5, at McCrary Park, to stay unbeaten in the American Legion Southeast Regional.
“It was all kind of surprise because I was in my tennis shoes, charting pitches at the start of the game,” Strickland said with a chuckle. “And then someone said, ‘Hey, Sawyer, go get ready.'”
Rowan starter Brandon White has been terrific this summer, but Randolph got to the lefty in the third — five straight singles to start the inning. The fifth hit gave Randolph a 4-3 lead, and Brett Graham took the mound to relieve White.
Graham got two big outs, but he walked a batter. When Graham hit a batter, Rowan trailed 5-3. With the bases loaded and Randolph threatening to break the game open, Strickland headed to the mound.
Strickland (6-2) was facing Randolph’s Clay Richardson, who had started the inning with a hit. Strickland got a called strikeout on a 3-2 pitch. That was the key pitch in the game.
“In that situation, I just had to throw a strike,” Strickland said. “I made a good pitch, a fastball that was low and in, and we got the out we needed. That was a big momentum shift.”
Rowan got one run back in the fourth when Tanner File and Chandler Blackwelder delivered two-out hits. When Strickland put up a 1-2-3 fourth against the top of Randolph’s lineup, he was starting to roll.
Then Rowan’s offense went to work in the fifth against Randolph starter Zac Kemp.
“Our hitters did a good job, took a lot of pitches and got into some deep counts,” Gantt said.
Rowan got a break when Lee Poteat reached base on a wild pitch on a strikeout. Poteat stole second — his fourth steal of the tournament — and that put him in position to score on Juan Garcia’s game-tying single up the middle.
A two-out error extended the inning, and then File came through again. His RBI single gave Rowan a 6-5 lead. Another error made it 7-5.
Then Randolph went down again, 1-2-3, against Strickland in the fifth, and the tide had turned for good.
“Sawyer was the story,” Gantt said. “He came in and he did a heck of a job. He kept some good hitters off-balance. He was going to be our guy tonight if we got into a situation where we needed a long-relief guy, and he just kept making good pitches.”
Jake Pritchard had driven in Rowan’s first run in the second inning with a base hit and he got another hit — a big, two-out, two-run single in the sixth to stretch Rowan’s lead to 9-5. When Trevor Atwood delivered a sac fly, Rowan led 10-5.
“Those guys at the bottom of the lineup came through in a big way,” Strickland said.
And Strickland just kept going and going. Randolph’s first hits off him came in the sixth, but he got a groundball to third baseman Garcia with two out and two on to end the inning.
Then Randolph went down in order in the seventh — and again in the eighth.
“I can’t say that anyone pitch was great tonight, but I was able to mix up my pitches,” Strickland said. “They’ve got a tough lineup, but I didn’t make a lot of mistakes. And when I missed, I missed low.”
Strickland came back out for the ninth. He walked Richardson, and then Kirby Lambert whacked his third hit of the game.
But there was no call to the bullpen. Strickland got a long flyball for out one. Then he fielded a comebacker and started a 1-6-3 double play to end the game. That may have been the first DP in American Legion regional history turned in by three homeschoolers — Strickland to Dalton Lankford to Hunter Shepherd.
The double play came on Strickland’s 89th pitch. He threw 64 strikes in his brilliant relief effort. He struck out five and allowed three hits. In 6 1/3 innings, he faced only 22 batters.
“He was the difference in winning this one,” Gantt said.
•••
NOTES: Pritchard was locked in at the plate, with two hits, two lineouts and one HBP. … Poteat scored three runs and knocked one in with a sac fly in the third. … Rowan is undefeated in the double-elimination tournament, while the other three surviving teams have a loss apiece. Rowan (36-11) takes on Columbia, Tenn. for the second time tonight at 7:30 p.m. Randolph County (27-12) and Florence, S.C., will battle in today’s 4:30 p.m. game for the first time. … Who pitches for Rowan today? Look for lefty Hayden Setzer or right-hander Caleb Link.