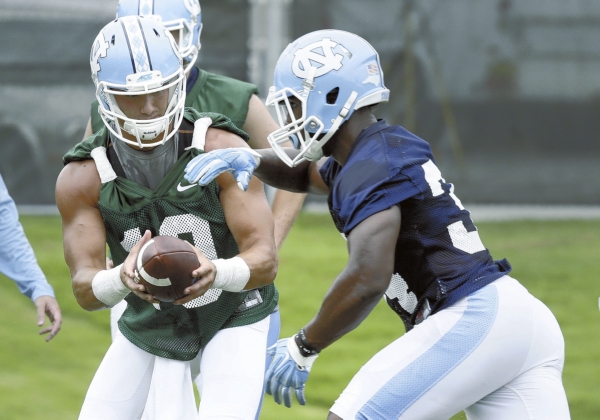 CHAPEL HILL (AP) — North Carolina’s players came to preseason camp talking about building on an 11-win season that ended with a pair of frustrating losses.

It was a positive sign for fifth-year coach Larry Fedora.

“It’s a good thing, that you don’t have to worry about them being satisfied with what they did,” Fedora said Friday after the first preseason practice. “That was just a new bar that was set.”

The Tar Heels (11-3) matched a program record for wins, swept through their league schedule to win the Atlantic Coast Conference’s Coastal Division and play then-No. 1 Clemson in the ACC title game. But the Tar Heels lost that one in a shootout, then lost to Baylor in another high-scoring contest in the Russell Athletic Bowl to end the year.

UNC again has a high-scoring offense to lean on led by new starting quarterback Mitch Trubisky, and featuring key returnees like tailback Elijah Hood and receiver Ryan Switzer. And that could help mask some of the defensive questions that loomed large in those losses to a pair of powerful offenses to end the year.

Most notably, UNC gave up a program-record 645 yards rushing to Baylor in the bowl loss.

That unit, which lost leaders Jeff Schoettmer and Shakeel Rashad, gets a stiff test in the opening game against Georgia in Atlanta on Sept. 3.

“We didn’t end the year the way we wanted to,” Fedora said. “They’ve had a bad taste in their mouths for 220 days now. They know they’re about 28 days from the possibility of getting that bad taste out of their mouth.”

The defense improved from a record-setting, poor performance in 2014 to a bend-but-don’t-break unit in its first year under defensive coordinator and former Auburn head coach Gene Chizik. That unit spent most of last year relying on basics, while the spring drills and preseason camp will allow that unit to add more looks to that unit now that the Tar Heels have a year of experience in Chizik’s system.

“We’ve been installing all year long, all summer, ever since the new round of freshmen got in,” said junior defensive tackle Nazair Jones, a third-team all-ACC pick by the media last season. “So we’ve caught those guys up. Now we’re re-teaching everything just to start with the fundamentals since it’s the first day, but besides that, we’re already adding stuff to our playbook and getting ready for the year.”