Traffic accidents occur within minutes of each other, two hospitalized 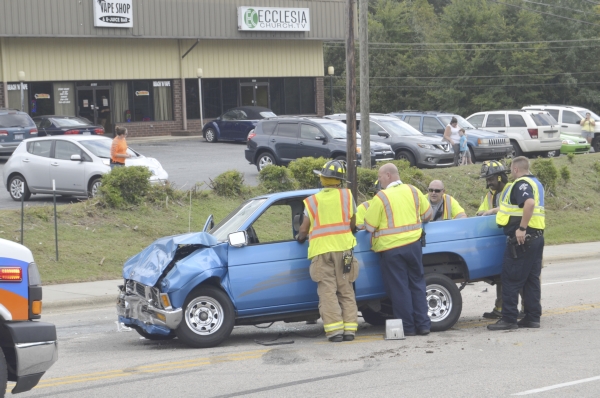 The driver of this pickup was seriously injured Thursday following a two-vehicle accident at 1804 East Innes St., across from the Rowan Social Services parking lot. A passenger was trapped in the vehicle and was freed by fire personnel. The driver of the other vehicle, not shown, also received injuries and was taken to the hospital. Shavonne Walker/Salisbury Post

SALISBURY — Two traffic accidents that occurred within minutes of each other tied officers up for quite some time at two intersections blocks from each other. Salisbury Police responded to a two-vehicle collision Thursday on East Innes Street near Rowan Social Services and 45 minutes later a second two-vehicle collision at Faith Road near Aldi.

A blue Nissan pickup and gray sport utility vehicle collided just after 2 p.m., pinning a passenger inside the truck. Police said the truck was traveling east on Innes Street in front of the Nazareth Resale store and the SUV was pulling out of the Rowan Social Services parking lot.

Both drivers were injured, one of whom went to Novant Health Rowan Medical Center. The other was taken to Wake Forest Baptist Medical Center, both via ambulance. No names or specific details were immediately available.

Salisbury Fire Battalion Chief Jay Baker said there were a total of three patients and the passenger had injuries to his lower extremities. Rowan County Rescue took one patient to the hospital.

A second crash that occurred just around the corner and a few blocks away resulted in no injuries. One vehicle was exiting the Aldi parking lot and an SUV was traveling on Faith Road.

There were no injuries in this collision and the passengers and drivers were seen walking around. The burgundy SUV was parked in the Wink’s Barbecue parking lot.

No details were immediately available regarding this crash. It’s not clear what charges, if any, will be filed in either crash.