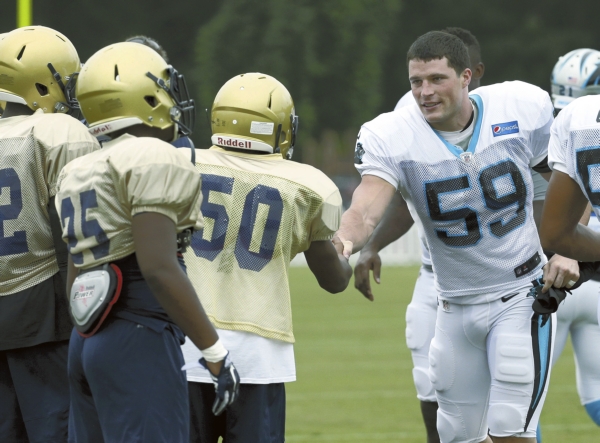 AP Photo/Chuck Burton Carolina Panthers’ Luke Kuechly (59) greets members of the Spartanburg High School football team during training camp practice in Spartanburg on Thursday. The high school participated in pre-practice stretching with the Panthers and held their own practice on an adjacent field.

SPARTANBURG, S.C. (AP) — The Carolina Panthers made history on Thursday by holding a joint practice with a high school football team.

The Spartanburg High School Vikings went through warmups and had a chance to interact with Carolina’s coaches and players at Wofford College before breaking off and doing their own work on an adjacent field.

Panthers director of community relations Riley Fields said it is the first time an NFL team has practiced alongside a high school team.

Fields said the organization wanted to celebrate the NFL’s Play 60 initiative by doing something special and unique. He said the Panthers needed to clear everything with the NFL, the NCAA and state high school officials before the project initiative was granted.

“Everyone said, ‘Wow this is a great idea,’” Fields said. “… We felt it was a special day for our players and for the Spartanburg High School football players.”

Panthers coach Ron Rivera said when Fields initially approached him about the idea he was against it. But the NFL Coach of the Year soon changed his mind once he realized it could be a huge benefit to the high school athletes.

“To me it’s about the love of the game and bringing it back to the community,” Rivera said.

Spartanburg High School coach Chris Miller said he thought it was a joke at first when his office received a call about practicing with the Panthers.

“It is just an unbelievable opportunity for us,” Miller said.

Miller said watching an NFL team run through similar drills to what they run in practice was an important lesson for his players.

“We’re constantly talking about it and they are doing it over and over again. Now they see guys who have paid the price and look where it has gotten them,” Miller said.

Rivera said the experience was also fun for his players.

“When you talked to some of our guys they had a chance to reminisce about the good old days,” Rivera said. “I was standing over there watching (the Vikings) earlier and it took me back to playing at Seaside High School. It was kind of neat.”

Linebacker Thomas Davis, the elder statesman of the Panthers, said it was an opportunity he would have loved to have had as a teenager growing up playing football in Shellman, Georgia.

“It will go a long way in these kids’ lives knowing they had an opportunity to practice with Panthers,” Davis said. “I impressed upon the kids the importance of coming out here and working hard and being able to do your job and listen to your coach.”

Davis, who regularly exchanges trash talk with Cam Newton during practice, also had a little fun with the high school players.

He even convinced one of them to talk some trash to Newton.

“I was kind of feeding him stuff to say to Cam,” Davis said with a laugh. “He delivered it pretty well.”