Back to school for RCEC 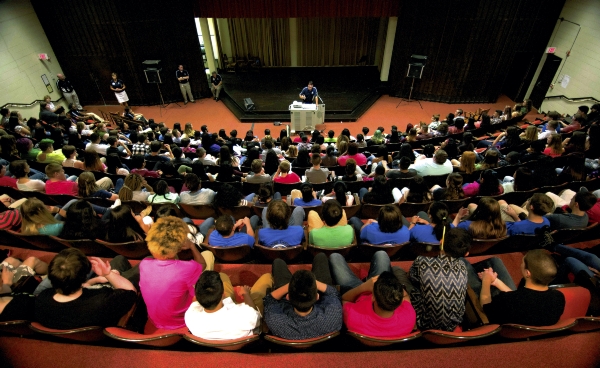 SALISBURY — It’s the end of the summer lull, and the campus at Rowan-Cabarrus Community College is vacant. Except for the student center. Thursday morning, seniors at Rowan-County Early College gathered there, while their underclassman found seats in the campus auditorium, to prepare for their first day back at school.

When asked how it felt to be back in class, weeks before any other school, or college, in the county, senior Nakya Blakeney groaned.

“Ask me at the end of the semester,” she said.

While they waited for a back-to-school assembly to begin, students ran up to old friends for hugs, snapped photos with classmates or chatted about their summer. A few groups sat at tables, comparing schedules.

Though the students began their high school classes Thursday morning, the fall semester at RCCC doesn’t start until Aug. 15. Students met briefly Thursday morning for the usual first day run-down of rules and expectations, which also allowed them to get a good look at the school’s new principal, Patrick Hosey.

During his address to the school, Hosey reminded students of the expectations they face, not only from teachers, but from the district as well, and encouraged them to make good choices and rise to the occasion.

“The hard work you do at the beginning pays off at the very end,” he said.

Though the students face hard work, pushing to earn both their high school diploma and an Associate of Arts degree in just four years, the morning was full of excitement and good cheer. Students applauded the school faculty, and gave a standing ovation to the school’s seniors when they filed in — many of whom recorded the event on their smartphones, or raised their hands to encourage louder cheers.

And seniors, when asked for advice for younger students, echoed the principal’s remarks.

“Make sure you study and don’t procrastinate,” Emmerie Cain said. “It’s going to be super worth it in the end.”

Hosey said in an interview at the end of the day that everything went smoothly.