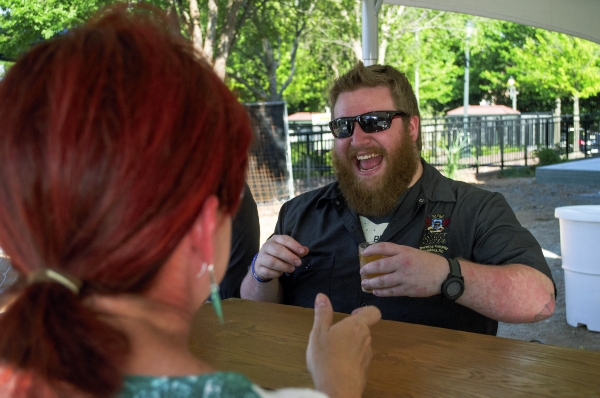 Johnny Maben, of New Sarum Brewing Company, serves up a tasting glass of one of the company's brews during the 2015 Summer Sip Festival. This year's event takes place Friday and Saturday. Josh Bergeron/Salisbury Post

SALISBURY — Downtown Salisbury, Inc. is bringing back the Summer Sip Series for its second year, displaying the blooming craft beer business in the Salisbury area.

The event will be over two days on Friday and Saturday. The Summer Sip Crawl will be 5 p.m. to 9 p.m. Friday. Participants can go on a tour of North Carolina brews by visiting 35 downtown Salisbury locations, each featuring a beer from a different brewery. Tickets for that event are $20, which includes a souvenir tasting glass, wristband and walking map.

The Summer Sip Festival will be held 3 p.m. to 7 p.m. Saturday in the parking lot of the Gateway Building at 204 E. Innes St. There will be vendors, food trucks and brews from more than 30 North Carolina breweries.

Dark Water Rising, a band from southeastern North Carolina, and Big Break, a Salisbury band, will be performing on Saturday. Tickets for the festival are $35 for general admission, $10 for designated drivers and $60 for VIP tickets.

“Downtown Salisbury, Inc. is especially proud of this two-day series because craft beer is blowing its way through our community. With the recent grand opening of New Sarum Brewing Company and the soon to be addition of Morgan Ridge, Salisbury is quickly becoming a hub for this blooming industry,” Paula Bohland, executive director of DSI, said in a press release. “Not only is it contributing to the economic growth of our town, but it is creating a common space for us to come together as friends, family, and community members.”

Tara Ludwig, director of public relations and communications for the Salisbury-Rowan County Convention and Visitors Bureau, said craft beer is “a huge movement right now in the Southeast.”

“It’s so fun to watch this movement flourish in our city and in our county,” she said.

She said since New Sarum Brewing Co. is now open at 109 N. Lee St. and Morgan Ridge Railwalk Brewery and Eatery will be opening soon at 421 N. Lee St., there is an opportunity to host more events to bring more visitors to town.

United Beverages of North Carolina, one of the sponsors for the series, will be bringing 20 craft breweries to the festival, including crafts from New Belgium Brewing Company, Oskar Blues Brewery, Granite Falls Brewing Company, Ballast Point Brewing and Spirits and SweetWater Brewing Company.

“It’s a very natural thing for us to partner up with local community events like Summer Sip,” said Paul Weisler, president of United Beverages.

He said he can see a craft beer business growing in Salisbury. Since 2015, the number of local accounts buying craft beer has gone up more than 50 percent, he said. And the number of craft items that United Beverages has been purchasing has tripled since 2015.

“It’s a really growing part of our business and has been for a decade or more,” Weisler said.

He said the craft beer business has the ability to gain interest from a lot of people. There is a growing base of people who are becoming more knowledgeable about craft beers, and suppliers are always developing new products.

New Sarum is also a sponsor of the series. Along with bringing six small breweries to the event, they will also host an exclusive after party for ticket holders from 7 to 11 p.m. where Dangermuffin from South Carolina and The Josh Daniel/Mark Schimick Project from Charlotte and Asheville will be performing.

The brewing company will be releasing three new beers, a seasonal galactic mango beer and two taproom exclusives called Stoneman’s Raid Golden Stout and Sawmill Gravey IPA. The new beers will only be available at the series or in the taproom.

New Sarum has tried to immerse itself in Salisbury culture as much as possible, from painting its sign on the side of the building to emulate the Cheerwine Building to naming brews after Salisbury’s important historical moments.

“We’re trying to go the extra mile to get people to understand, we want to fit right in and bring tourism into the city,” Andy Maben, brewmaster, co-owner and founder of New Sarum, said.

Maben said he believes the craft beer business in Salisbury is growing and more breweries are sure to open in the future.

To help bring craft beer to as many people as possible, Maben said New Sarum tries to be at any event that is happening in the city.

“We’re just trying to make sure we support the local (community) as much as possible,” he said.

Morgan Ridge Brewery and Eatery will be at the series introducing themselves to the community. Tommy Baudoin, one of the owners, said the brewery should be open towards the end of this month.

“We want to … introduce some of the products that we have and let them know that we’re going to be opening,” he said.

One of those products is a Chocolate Cayenne Imperial Stout, developed by Nikki Koontz, head brewer for Carolina Blonde in Mooresville.

When the brewery opens, there will be 16 beers on tap.

Baudoin also said the craft beer business seems to be on the rise in Salisbury.

He agreed that the business has the potential to bring a lot of tourists to the area.

Maben said he was happy that Morgan Ridge’s brewery will be opening in its location downtown.

“We all work together towards one common goal, and that’s to bring great craft beer to the people,” he said.