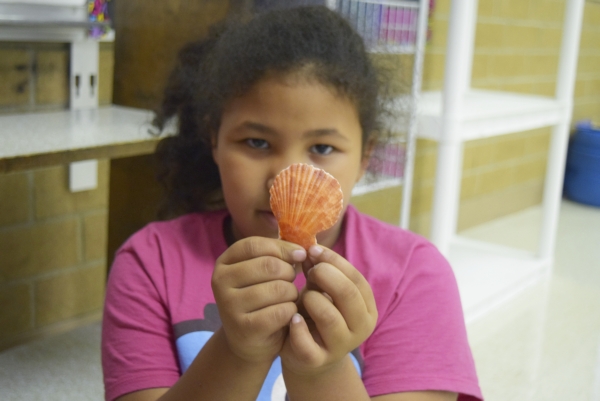 Morgan Baker holds up a shell. Baker is one of nearly 100 students participating in North Rowan Elementary's Steamer Camp. The three-week camp uses a weekly topic to teach literacy and problem-solving strateigies. During the first week, campers studied the ocean, and took a trip to Sea Life Aquarium in Concord. Rebecca Rider/Salisbury Post

The three-week camp is open to rising kindergarteners through rising second-graders at North Rowan Elementary who didn’t qualify for the district’s “Read to Achieve” program.

Campers spend the weeks focusing on literacy, blended learning, math and participating in science labs that match the theme of each week. During the first week, the 100 students attending the camp trouped down to Concord to the Sea Life aquarium, where students learned about the ocean and got to touch starfish.

Back in the classroom, groups learned about the zones of the ocean, wrote prompts about their experiences, researched dolphins, or learned to sort and identify shells. In the cafeteria, older students helped others study water density by filling bottles with water, food coloring, oil and beads.

Qadir Thomas, a rising fourth-grader, said the aquarium was his favorite part.

“I enjoyed when we went to the aquarium because we saw a lot of sharks and a Japanese spider crab,” he said.

Students in the water density lab seemed to all agree that the aquarium was the highlight of the first week of camp as they talked about the size of the spider crab, which can have a leg span of up to 12 feet, or demonstrated how to touch a starfish — gently, with two fingers.

The camp ends one week before school starts, and Bryant said she hopes it will give the students a leg up on the school year. It also gives students a safe haven to make mistakes.

“I want them to learn to take chances and risks without fear of failure,” Bryant said.

But the camp also has another important message:

“You can learn and have fun at the same time,” Bryant said.

Most learning takes place through making mistakes and sorting through what went wrong, a process that can be difficult to convey in a classroom. In addition to pure knowledge, the camp also connects lessons with the real world and teaches younger students social skills. Each day starts off with a morning assembly where students practice manners and social interaction. And it seems to be working — for a few students, at least.

The weeks are also open to older students, who serve in an advisory role, helping younger students with projects and tasks, and setting up experiments. Students enrolled in Exceptional Children’s programs were also able to attend.

“We have a variety,” Bryant said, “a diverse group of students.”

The program seems to be a hit with students, and Bryant said that roughly one third of the school’s rising kindergarteners are attending.

“It’s been wonderful,” she said.