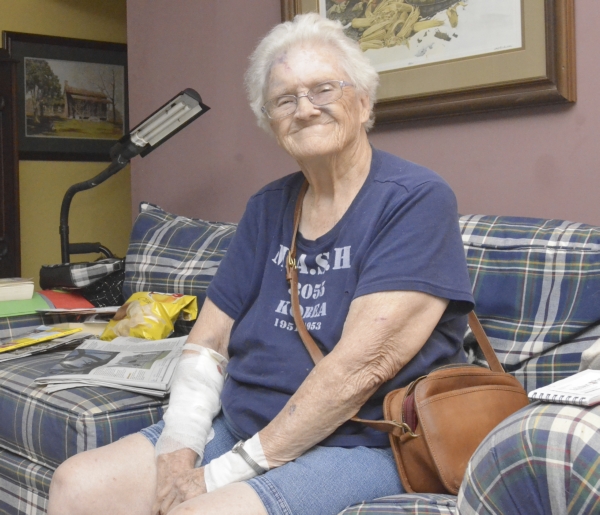 Virginia Graves, who was a nurse during the Korean War, was almost mugged outside her Fulton Street home Tuesday. The would-be thief, who has not been caught, tried to grab her purse, but she had it across her shoulders as seen here and was knocked to the ground. She had some cuts and bruises and well as a bump on the head, but is on the mend. Shavonne Walker/Salisbury Post

SALISBURY — It all happened so fast, but Virginia Graves knows one thing for sure: She’s not going to let a would-be thief keep her from feeling safe in her town.

The 86-year-old had just returned home from the grocery store Tuesday when she felt a tug on her purse. She had it slung across her body and had an armful of groceries. She’d placed the bags up her lower arm and was turning to walk into her Fulton Street home when he suddenly was upon her.

The man is described as a black male in his 20s who was wearing a tan, sleeveless shirt.

“It happened so quick. He was just there,”  Graves said.

The Korean War veteran was either thrown to the ground or fell, she’s not sure which. A woman passing by on her way back to jury duty at the nearby county courthouse stopped to help Graves. Others in the area, some of whom were attending a Rotary Club meeting, also stopped to help, she said.

Graves said she tried to call 911, but couldn’t get her fingers to work, so a stranger who she only knew as Kim called a friend for her. Clerk of Court Jeff Barger, whom Graves has known for years, was also in the area and came to her aid.

The man who tried to steal her purse was seen running down Liberty Street.

She was taken to the hospital where was treated and released. Graves sat in her living room Wednesday with her cat Hillary. She had a large bump and bruises on her temple. She had bandages on both arms. Graves said she had three or four plastic shopping bags on her left arm that dug into her skin when she was attacked.

She somehow received cuts to her right arm and now has bruises all over her arm. She was grateful for the Salisbury police officer who showed genuine concern for her, Graves said.

Graves was mobilized with an Army surgical hospital and served from from 1951 to 1953 during the Korean War.

The veteran said she still feels safe in her neighborhood, but says she’ll be more cautious of her surroundings in the future.