Local businessman, Zimbabwe native thanks police with a gift 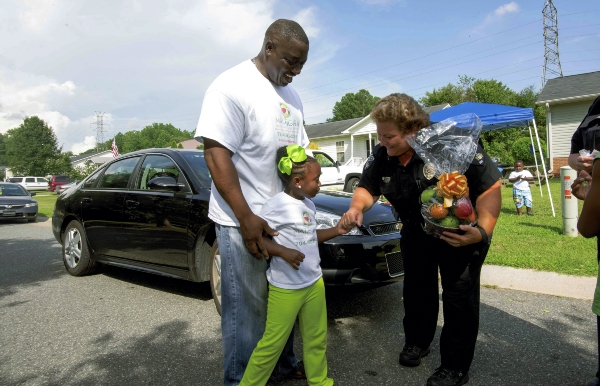 Daniel Matangira, owner of Matangira Recycling Service, and his daughter Mailee Grace present Salisbury Police Capt. Sheila Lingle with a fruit basket. Matangira went out on Tuesday night during National Night Out and handed out fruit baskets to every police officer that he found. Jon C. Lakey/Salisbury Post

SALISBURY — In Daniel Matangira’s native Zimbabwe, corruption is rampant in government. Police brutality, torture and even abduction are almost daily occurrences. The married father of two has a successful recycling and waste disposal business and decided to show his appreciation for law enforcement with a handshake and a gift.

Matangira bought fruit baskets and gave them to police officers during Tuesday’s National Night Out event. He ordered the baskets from Harris Teeter and while there, manager Tony Walz heard about what the business owner was doing and contributed more baskets to Matangira’s cause.

One by one, Matangira and his daughter, Mailee Grace, 5, shook hands with officers and presented them with fruit baskets. He wanted her to come with him to see good deeds in action and to know all police are not bad, he said.

She said they’ve been shown lots of support from area churches and other citizens, and she’s grateful and thankful to them.

“With continued growing pains in most communities across the country between communities and men and women in blue, I wanted to show in a small way how much I appreciate law enforcement,”Matangira said.

His goal is to erase the stigma of mistrust of police.

Matangira works early morning hours and said he sees police on the roads.

“Almost on every corner I see law enforcement,” he said.

Matangira knows some local law enforcement officers in Salisbury and knows Sheriff Kevin Auten and said feels as though they are “genuinely vested in the affairs of the community.”

“They live amongst us, have kids and have their roots firmly grounded in the city,” he said.

One main motivation for coming to America was the lure of the freedom provided in this country to “anyone regardless of color or ethnic background,” he said.

“The protections we have here in America are seldom guaranteed in Africa,” Matangira said.

As to being stopped by police, Matangira said, ultimately everyone — officers and those who are stopped — want to go home at night.

“They are here to protect us and go home to their families as you and I. The key word is ‘comply’ with any officer and let’s all keep our local community an example for other communities to follow,” he said.