Clinton’s VP pick: Trump would be the ‘you’re fired’ president 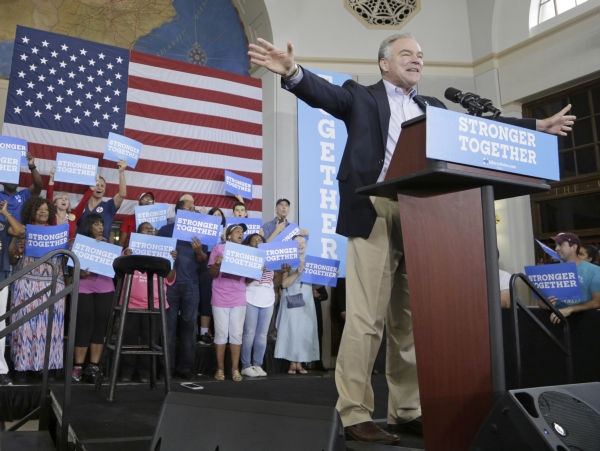 GREENSBORO — In an attempt to draw a sharp contrast between the Republican and Democratic nominees for president, U.S. Sen. Tim Kaine asked a single question to the crowd of people gathered in city’s Douglas Gaylon Depot.

When Kaine tried to note the difference between Clinton and Republican presidential nominee Donald Trump, one rally attendee yelled, “there’s no comparison.”

Kaine, the Democratic nominee for vice president, outlined Clinton’s economic plan on Wednesday during a campaign stop in Greensboro. Parts of the plan emphasized by Kaine included: infrastructure investments, making college debt-free, ensuring that everyone has access to preschool, equal pay for women, making sure the wealthy pay their fair share of taxes, sharing corporate prosperity and raising the minimum wage.

He paused briefly when talking about sharing prosperity to explain it further.

“You don’t give tax breaks to a company to take a job overseas,” Kaine said. “So, Hillary Clinton has laid out shared prosperity — deeper investments in profit sharing, improving the rights of labor to organize and stand strong for work.”

He paused again when talking about raising the minimum wage. A person who makes minimum wage and works full time would be at or below the poverty line, he said.

“We don’t need to raise the minimum wage just to say we checked that issue,” Kaine said.

Other parts of Clinton’s plan that Kaine didn’t talk about include: strengthening and expanding social security, capping prescription drug costs and allowing students to refinance student loans. Her plan would require increased tax revenue to make projects described in her plan happen.

During his speech, Kaine cited a prediction from rating agency Moody’s Analytics that Clinton’s economic plan would make the economy stronger when compared to Trump’s. The company’s report on Trump’s plan found the American economy would be “more isolated and diminished” with a Trump presidency.

Moody’s found that Clinton’s plan would create 10.4 million new jobs. By comparison, the agency found that America would lose about 3.5 million million jobs under Trump. Kaine emphasized the difference between a 10.4-million-job gain and a 3.5-million-job loss.

“That is massive,” he said. “That’s like a whole bunch of states combined, workforces combined. And, that is going to be the difference between Hillary Clinton, a ‘you’re hired’ president, and Donald Trump, the ‘you’re fired’ president.”

“Maybe Tim Kaine should take notes from Governor McCrory and the state legislature before promoting an economic agenda that Hillary Clinton doesn’t even know how to fund,” said State Sen. Joyce Krawiec, of Kernersville, in the GOP’s news release.

Light said he enjoyed hearing Kaine’s comparison between the two candidates as a “you’re hired” and a “you’re fired” president.

“I think it kind of plays along with Trump’s reality show mentality,” Light said.

Trump famously told contestants on his “The Apprentice” reality show, “you’re fired” when they were kicked off the show.

Hungarland said she prefers Clinton and Kaine because their economic plans invest more money in education and things that will directly benefit her and the people she cares about.

“With Trump, it seems like there’s just going to be cuts everywhere,” she said.