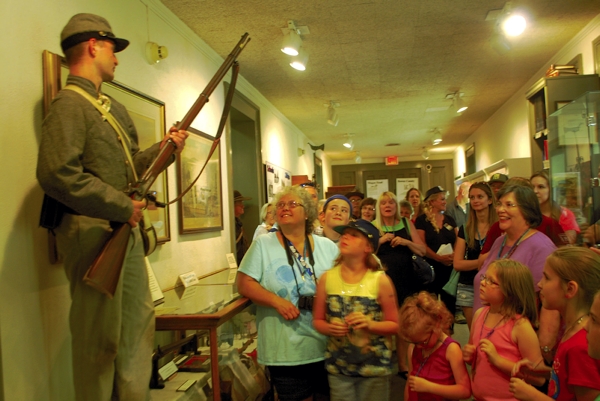 Visitors are surprised by a very true-to-life display

Teddy Roosevelt will be our host and will “Keep us all in order!” George Washington will return to Rowan County to shake hands. Napoleon, a western cowboy, and an iron horse conductor will no doubt cause us trouble.

You will also meet some local historical characters like Elizabeth Maxwell Steele and Nathaniel Greene. A Neanderthal, Civil War soldier, monkey, sword fighting knights and other characters will entertain and educate you through this adventure.

Friday, Aug. 5 is the Season 9 Kick Off Party, a laid back, fun way to learn about the 2016-2017 LSt season, as well as meet new artistic director Craig Kolkebeck. LSt is a participant in Downtown Salisbury’s Summer Sip. Drop in 5-9p.m.; the big presentation about the season will be at 7 p.m. Visit www.leestreet.org/season9/ or call 704-310-5507 or email info@leestreet.org

Directed by Beth Homan. Held aat At Lee Street theatre. Performances dates are Nov. 10-19. Bring a current headshot and resume, if you have one, prepare 16-24 bars of an appropriately styled song, bring your sheet music (an accompanist will be provided), and come dressed to move. You may also be asked to read a side or sing something specific from the script. You need only attend one of the evening auditions. See details at www.leestreet.org

The “Summer Sip Crawl” — 5-9 p.m. Friday, Aug. 5, with 35 downtown Salisbury locations, each will featuring a beer from a different brewery. Tickets are $20 and include a souvenir tasting glass, wrist band and walking map.

The “Summer Sip Festival” — 3-7 p.m. Saturday, Aug. 6, with more than 30 North Carolina breweries featured plus vendors, food trucks, and live music from “Dark Water Rising” and Salisbury natives “Big Break.” New Sarum Brewing Company will host an exclusive after-party for ticket holders which will feature the bands Dangermuffin and The Josh Daniel/Mark Schimick Project. Tickets for the festival are: General admission $35; Designated Driver tickets $10; VIP (limited availability) $60; and a two-day pass to both events is $50.

Tickets for the entire series may be purchased at www.downtownsalisburync.com or 704-637-7814.

7:15 pm to 9 p.m. Sept. 8: Under the direction of our new conductor, Jason Partridge. In need of percussion, low brass (trombone and baritone) and clarinets, but all are welcome. Rehearsals at Trinity United Methodist Church, 426 E. First St., Kannapolis. Email president@primetimeband.org or visit www. primetimeband.org

City of Salisbury hosts Movies in the Park

Auditions for ‘Peter and the Starcatcher’

Auditions for Piedmont Players Theatre’s upcoming production of the Tony-winning musical “Peter and the Starcatcher” will be held on the third floor of the Meroney Theater, 213 S. Main St. Performer should prepare 16 bars from a song in the style of the show. Must bring sheet music. The Tony-winning play upends the century-old story of the beginning of Peter Pan.  Show dates are Oct. 6-15. 704-633-5471. See www.PiedmontPlayers.com for more.

Now accepting performer applications. The annual BUSKERS~BASH in downtown Salisbury hosts more than 40 street performers in a Best-Buskers Contest. Musicians, dancers, jugglers, magicians and more perform throughout town. Each receives a VOTE-FOR-ME poster and a “Busker-Bucket.” Attendees receive a walking map and custom guitar picks for voting. To vote for their favorite, they toss a guitar pick into the Busker-Bucket. Votes are counted at 8 p.m. and winners are announced at a Grand Finale at New Sarum Brewery at 9 p.m. Prizes awarded! To apply, visit https://downtownsalisburync.com/buskers-bash-contestant-application. For more information, contact: katelin@downtownsalisburync.com

The LandTrust for Central North Carolina offers its 16th Annual RiverDance event on Saturday, Aug. 20 from 7 p.m. to midnight at the Historic Salisbury Train Station. At the LandTrust’s premiere fundraising event, attendees will dance the night away to the beach, soul, and rock-n-roll stylings of The Castaways, while dining on Southern fare by Divine Appetit.Tickets are $75 per person or $150 per couple, available at 704-647-0302, or http://landtrustcnc.org/purchase-riverdance-tickets/

WINSTON-SALEM — If you’re an actor or other performer over 40, you can’t help but notice that the opportunities become less and less available the older you get. Understandably, most community and professional theatre companies are focused on building audiences that will continue to be around well down the road and encouraging younger folks to attend. To accomplish that, many plays and musicals are focused on younger audiences. The byproduct is that there are fewer shows that feature mature actors and performers and fewer plays and musicals that deal with subject matter focusing on issues faced by older patrons and communities.

Enter the 40+ Stage Company, a new nonprofit theatre company that plans to focus on mature actors and material that will deal with issues facing our aging populations. Artistic director Gene Johnson says the company plans to offer four to six productions each year, which will include at least one musical or revue and at least one play that can tour to retirement communities and smaller theatres across the state. In addition, there are plans to introduce one or two new plays each year with senior themes. The Company also plans to offer classes for those over 40, beginning as well as Master Classes.

A website will be available soon. Information is available on the 40+ Stage Company Facebook page or by email at 40PlusStageCompany@gmail.com. They are currently based at 5780 Brookway Drive, 336-575-4446.

Reynolda House Cinema Under the Stars

‘Goonies,’ ‘Labyrinth,’ and ‘Field of Dreams’

WINSTON-SALEM — Entering its second decade as one of the Piedmont Triad’s most popular outdoor film series, Cinema Under the Stars returns to Reynolda House Museum of American Art in August. The series will show films Aug. 5, 12, 19 and Aug. 26. Gates open at 7:30 p.m., and films will be shown on the front lawn at 8:30 p.m., or dark. In case of rain, films will be shown in the Babcock Auditorium. Arrive early and picnic on the lawn and to participate in nightly themes inspired by the films. Beer, wine and soft drinks will be available for purchase; no outside alcohol is permitted. Well-behaved, leashed dogs are welcome. Admission is $5 per person or $20 per car.

Cinema Under the Stars is co-presented by the School of Filmmaking at the University of North Carolina School of the Arts. For more information, visit reynoldahouse.org