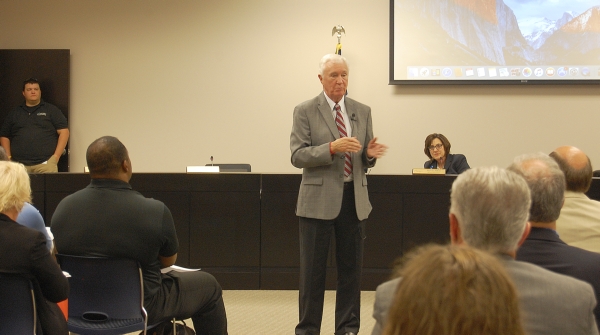 North Carolina Beverage Control Commission Chairman Jim Gardner spoke about Phase III of Talk it Out, a program that raises awareness about the dangers of underage drinking, at the Wallace Educational Forum on Tuesday. Amanda Raymond/Salisbury Post

SALISBURY — When the Talk It Out initiative sent out surveys to 500 North Carolina residents and 300 middle schools, Jim Gardner, chairman of the North Carolina Alcoholic Beverage Control Commission, said he knew there was a problem.

Students said they believed there was an underage drinking problem, while parents said that there might be a problem, but not with their children.

“We immediately knew we had a problem,” Gardner said. “We had to bring it to the attention of everybody in this state that we have a problem with underage drinking.”

Gardner spoke at an event on Tuesday at the Wallace Education Forum to introduce the third phase of the Talk it Out initiative.

Talk it Out is a program that was started by the N.C. ABC Commission two years ago with a mission of raising awareness of underage drinking and encouraging parents to talk to their children about it.

The first phase included running advertisements to let parents know that there was a problem with underage drinking. The second phase was about asking parents to do something about the problem, specifically talking with their children about it. Now, the third phase will inform parents about the dangers of underage drinking and what it could do to an underdeveloped brain.

Also, binge drinking slows the functioning of parts of the brain that control things like breathing and could actually lead a person to stop breathing.

Garnder said he has been asked how they will measure the success of the program, and he said it will be a success when not even one child dies because of underage drinking.

“This is the greatest state in the United States, and if we can’t meet our responsibility to do something about (underage drinking), there’s something wrong,” he said.

Al Wood, a former basketball player for the University of North Carolina at Chapel Hill, also spoke during the event.

Wood set scoring records in the Atlantic Coast Conference and the NCAA while at UNC. He was picked fourth in the first round of the 1981 NBA draft. He is now an ordained minister with MorningStar Ministries.

He said his mother started drinking when she was a teenager and ended up killing someone while she was drunk. She blacked out and woke up the next day in jail. She could never remember what happened.

“I found myself in a place one day where I didn’t want to be, but I didn’t know how to stop,” he said.

He is now a 28-year recovering alcoholic.

Wood participates in the Game Plan for Life program and goes around to different schools to share his story while encouraging students to take a different route.

“All I want to do until the day I die is to be able to have a positive impact on other people’s lives that I come in contact with, and this really gives me the opportunity to do that,” he said.

At the end of the event, a parent and four students talked about how Game Plan for Life affected their own lives for the better.