Lyerly sizzles in California with 64, moves to 2nd place 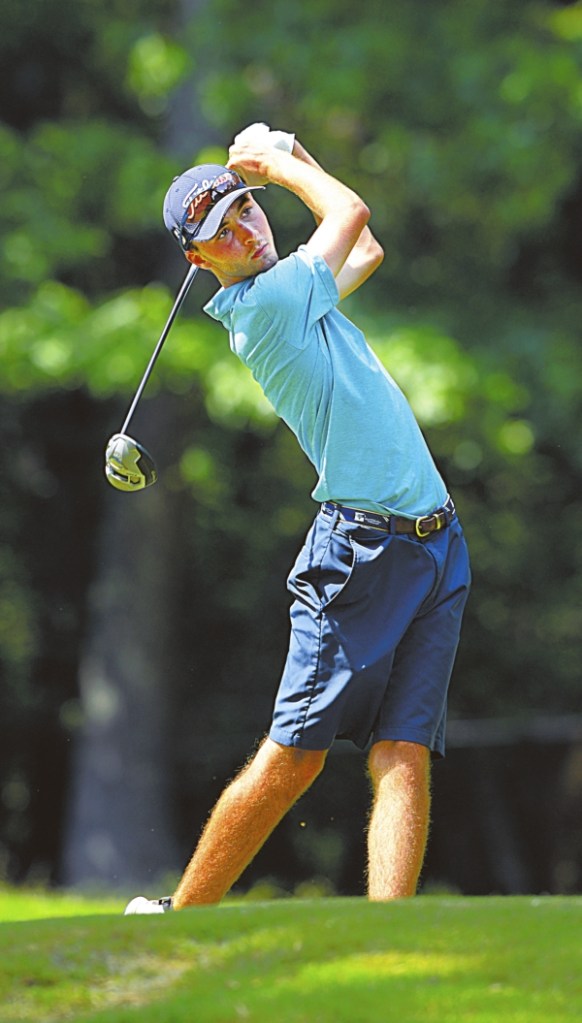 Wayne Hinshaw/for the Salisbury Post ... Shown playing in the Horace Billings Rowan Amateur Championship at Corbin Hills on July 22, Nick Lyerly watches his drive. Lyerly shot a sizzling 64 at the Big I Championship on Wednesday in Sacramento, Calif.

He may love it now.

Lyerly made seven birdies during Wednesday’s third round, fired a 7-under par 64 and moved up to second place, 9-under par for the event at 204. He had been tied for 12th place after two rounds, after two straight 1-under par 70s. The 64 was one stroke off of the course record at Del Paso.

The final round is today. Lyerly, a rising senior at East Rowan High School, trails only Jacob Bergeron of Slidell, La., who is 11-under par (202) for the tournament, after a 65 on Wednesday. Bergeron also has a 70 during Monday’s first round, but carded a 67 on Tuesday.

Lyerly, 17, already the holder of numerous championships, junior, high school and otherwise, carded his best score ever in tournament play. His previous best was a 65.

“Yes, I guess I did pretty well today (Wednesday),” Lyerly said, almost as if it was just another day at the office. “My putting was really on and that was probably the biggest improvement over the first two days.”

Yesterday, Lyerly set the stage for a remarkable round with two birdies right away. He birdied the par-5 first hole and then the par-3 second for a great start.

Lyerly’s bogey-free round then saw six consecutive pars. And while a string of birdies would start on the ninth hole, the pars prior may have been the key to the round.

“I had to scramble a little on four of the holes (5-8),” continued Lyerly. “I had to make some 3-to-5 footers to save par on those holes. Fortunately, I made all of those little short putts and that kept the momentum going.”

Lyerly then headed to the No. 9 tee box. There, he started a string of five straight birdies — three par 4s, a par 3 and a par 5, taking him to 7-under for the day with five more holes to play.

He made a 10-foot birdie putt on No. 10 but on the next hole, Lyerly had his shot of the day. On the par-4 11th, Lyerly hit his drive into a fairway bunker. No problem. He hit a 9-iron out of the trap from 130 yards to within six inches. “I couldn’t believe that I knocked it that close … that was a pretty easy tap-in,” quipped Lyerly.

That par and the ones on the remaining holes led to a back-nine 31, and a minus-7 round of 64 on the day.

Lyerly said that he was a little disappointed that he didn’t add any more birdies in the final five holes, and tried not to get too conservative.

“But you can’t help but be a little more careful,” he said. ” I was pleased to be where I was and I wanted to stay there. You use a few more guided swings because you can’t afford to miss in certain spots. Sixteen through 18 is a tough finishing stretch, so par is a good score on those holes.”

Lyerly will play today’s final round with Bergeron and Mark Reppe, who is in third place. It will be the final group of 61 young golfers who made Tuesday’s cut. A total of 93 outstanding golfers from around the country started the event on Monday.

“I’m just going to relax a little bit (Wednesday night) and come out tomorrow and go after it,” said Lyerly. “I’ll have the same game plan I’ve had the last three days.”

Justin Emmons of Asheboro, Lyerly’s friend and future teammate at UNC Greensboro, entered Wednesday tied for 30th place after a 69 on Tuesday. However, Emmons shot 75 yesterday and is tied for 41st place, with a total score of 219, four-over par.

Another North Carolinian, Blake McShea of Zebulon, is at 213, tied for 18th place. He had a 72 on Wednesday.

NOTES: The players are walking the course and carrying their own bags. Lyerly said that caddies are allowed in the final two rounds but with all of the players from North Carolina making the cut, he was on his own…. Lyerly said that he hasn’t seen a cloud all week and the temperatures are in the mid-90s. “But’s with very little humidity, it hasn’t been bad at all.”