Leonard Pitts: An open letter to the GOP about Mr. Trump 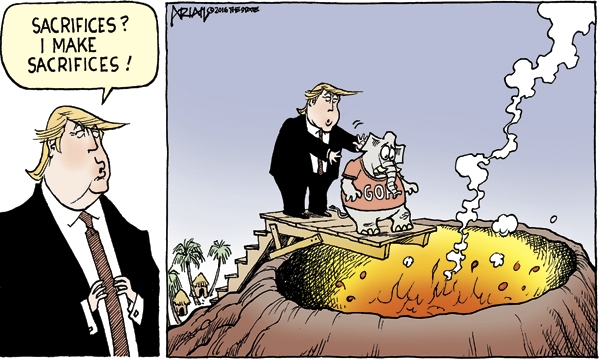 Congratulations. By now, one thing is beyond dispute: You have produced a candidate for the ages.

This column is only 600 words or so, which gives me not nearly enough space to do justice to the many ways Donald Trump has proven himself unfit to be president. He is an overgrown frat boy trying to masquerade as a statesman. But even by the somewhat elastic new standards you and he have embraced, his attack on Khizr and Ghazala Khan represents a breathtaking new low.

As the whole country knows by now, the Khans, Muslim-American immigrants, appeared last week at the Democratic National Convention to speak about their son, Army Capt. Humayun Khan, who was killed in Iraq in 2004 as he approached a suicide bomber. Your candidate, of course, has made Muslim- and immigrant-bashing a cornerstone of his campaign.

With his wife standing silently beside him looking sick with sorrow, Khizr Khan questioned whether Trump has ever read the Constitution and offered to lend him a copy. And he reminded your candidate of the sacrifices of a rainbow coalition of patriots, as reflected in the tombstones at Arlington. “You,” he cried, “have sacrificed nothing and no one!”

Your candidate belittled the grieving parents of an American hero.

In interviews Sunday, he suggested Ghazala Khan was silent because she was not “allowed” to speak, i.e., a woman rendered mute and subservient by Islam. He also pushed back against her husband’s charge that he has made no sacrifices.

“I think I’ve made a lot of sacrifices,” he told George Stephanopoulos of ABC News. “I work very, very hard. I’ve created thousands and thousands of jobs.” When pressed on whether that really constitutes sacrifice, he doubled down. “I think those are sacrifices,” he said.

For the record: Ghazala Khan says she was silent because even now, 12 years later, she cannot see her son’s image, which was projected on a screen behind her, without breaking down. So she was just trying to hold herself together. And working hard in your own interest is emphatically not a “sacrifice,” especially as compared with losing your son in this country’s service.

I could elaborate, but as I told you, space is limited and I need to reserve some to say this:

Shame on you. Have you no honor? Are you really so bereft of basic human decency?

That question applies to every one of you, from House Speaker Paul Ryan and Florida Sen. Marco Rubio, all the way to the everyday voter who endorses this man, knowing that he’s a flaming oil spill of a human being. That’s incomprehensible.

The economy doesn’t explain it. Party loyalty doesn’t excuse it. Remember the pious lectures you gave on patriotism in 2008 because Barack Obama declined to wear an American flag lapel pin?

I do. And it makes your affirmation of this guy all the more inexcusable. As his attack on the Khans proves, Trump can’t even fake patriotism.

I respect the honorable members of your party who have recognized him for the despicable little man he is and the existential danger he represents and refused him their endorsement. For the rest of you, I offer this reminder:

History will not forget.

And history will not forgive.