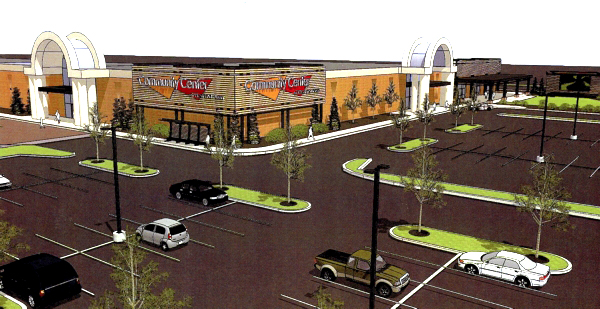 Submitted photo - An architecture firm hired by Rowan County Commissioners has proposed that West End Plaza's parking lot be filled by green spaces and a walkway as part of a renovation project.

SALISBURY — If Rowan County commissioners follow recommendations contained in a master plan presented Monday, they may end up with a hefty amount of space not occupied by county departments at the former Salisbury Mall.

The latest master plan for West End Plaza shows Social Services and the Health Department moving into the building next. Landscaping, greenery and pedestrian walkways would be added to the parking lot as part of the master plan. A veterans memorial could be placed at the entrance to the building, where a water fountain currently stands.

In the latest master plan, there’s also more than 130,000 square feet of “flex space.” Some of that space, but not all of it, would be occupied by private businesses. Less than half of the facility, however, would be used for county departments, which is what commissioners cited as the purpose of the building when they bought it for roughly $3.4 million in 2013.

Previously, local history, Code Enforcement and the Planning Department were potential tenants at West End Plaza. ADW Architects, hired to oversee West End Plaza renovation, told commissioners on Monday that those departments wouldn’t make sense in West End Plaza. Social Services and Health would be the only other departments added to West End Plaza. A community center would also be added, according to the master plan.

County commissioners didn’t take any action on the master plan or pick a specific layout they liked best. Commissioner Craig Pierce, however, said that he preferred an option that places a community center in the former J.C. Penney space, Social Services in the former Belk space and health adjacent to Veterans Services.

“Personally, I just think there’s too much here to digest to make a decision today,” he said. “There’s too much to take in, too much that needs to be investigated to decide which way is best for us.”

Pierce suggested that commissioners compare the most recent master plan with one presented more than a year ago.

County officials have previously raised the possibility of using parts of West End Plaza for Rowan-Cabarrus Community College or the Rowan-Salisbury School System. The newest master plan discounts both of those ideas.

ADW Architects didn’t include a cost with their presentation on Monday. Originally, the company estimated West End Plaza’s renovation would cost $27.58 million.