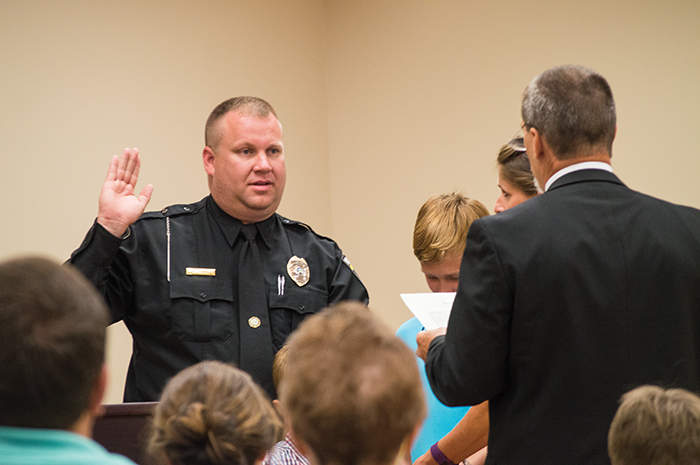 CHINA GROVE — Town officials have picked one of their own to serve as the next police chief.

Andrew Deal, a 39-year-old China Grove native, will take over for Eddie Kluttz, who served as chief for several years and recently retired. Since 2014, Deal has served as the second in command to Kluttz.

Kluttz said China Grove residents “shouldn’t notice any changes in the operations of the police department” as a result of his retirement and Deal’s promotion.

Former China Grove Mayor Don Bringle said Kluttz has offered sound leadership during his time as chief and it should continue under Deal. Local hires are valuable because they’re already familiar with the community, Bringle said.

Deal came to China Grove from the Kannapolis Police Department, where he served as a leader of the agency’s special response team. Deal moved from Kannapolis to China Grove after rising to the rank of lieutenant. Prior to Kannapolis, he worked as a probation and parole officer.

Deal has a bachelor’s degree from the University of North Carolina at Charlotte. He graduated from South Rowan High School. Deal said he is not related to China Grove’s town manager, who has the same last name.

After being introduced and being sworn in by Clerk of Superior Court Jeff Barger, Deal spoke briefly to the standing-room-only crowd.

“We as a community have to band together for the greater good,” he said. “And, I think that we’ll do that here in China Grove.”

He said the China Grove Police Department would continue to work hard. Officers will be involved in the community and communicate with China Grove residents, he said.

Deal praised Kluttz’s leadership during his several years as chief. Mayor Lee Withers said Kluttz was recruited to overhaul a department with internal problems, and Kluttz turned the department around. Now, the police department needs to build on the good leadership and excel, Deal said.

Chief Deal starts as police chief immediately. He will oversee a department of 13 officers, including the chief, and nine reserve officers. He said the department now has one vacant officer position. The China Grove Police Department could either promote from within or hire someone to fill the second-in-command position that Deal will vacate.