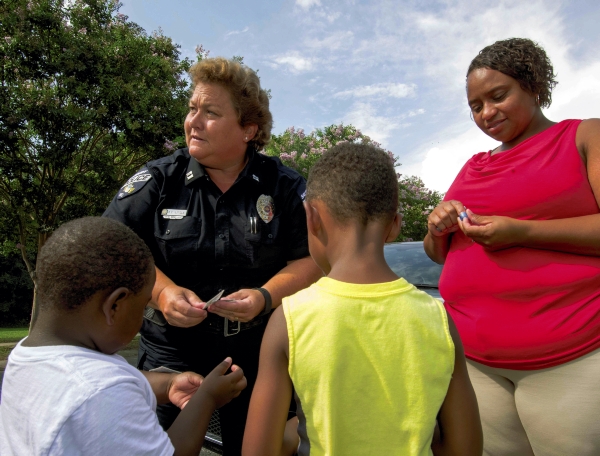 Salisbury Police Captain Sheila Lingle handed out some stickers and small flashlights to Emmanuel and Elijah Sherald, who were with their mother Natasha, right. Communities all across Salisbury and Rowan County came outside to enjoy each other’s company on the annual National Night Out. Jon C. Lakey/Salisbury Post

SALISBURY — “Come and eat. Come and get it,” Flora Sorocki yelled to her neighbors. It was a greeting she tossed around to the crowd gathered on her front lawn during Tuesdays National Night Out block party on Celebration Drive.

Neighborhoods all across the United States use the event as a way to build relationships between law enforcement and communities. Area police officers met residents in the neighborhood located off Ryan Street.

Sorocki, the neighborhood president, said they organized the event to “bring them together. I want us to fellowship,” she said.

She’s lived in the neighborhood for 17 years and says she knows a lot of the police officers, and she appreciates them.

“I appreciate them and the fire department. The thing is, we can interact with them. Not all of them are bad,” she said.

She encourages everyone to pray for law enforcement and the community.

Thomas Cook has lived in the community for 10 years and said he’s attended all three of the Night Out events held there.

“I like it. It brings the neighborhood together. Normally you don’t get to because of work or other things,” he said.

Michaela Vargo used to live in the neighborhood and came back to spend time with her father, Larry Clark, who still lives there.

“It’s a chance for us, anyone of us no matter what race you are, whether you know each other or not, to come together,” Vargo said.

“It’s about community bonding,” she said.

Police Capt. Shelia Lingle said there were about 20 officers in about 22 communities, as well as police chaplains and police cadets.

“We get out and meet everyone,” she said.

Chaplain Tom Teichroew said he hadn’t been able to attend in the past because of other obligations, but canceled an engagement to be a part of the event this year.

Jo Leach said this event is wonderful because it’s a chance to meet neighbors. She’s lived in the community for 11 years.

Dezire Rankin, came out to the event with her 9-month-old daughter, Ava.

“It’s the one positive thing we have in Salisbury,” she said.

She said she doesn’t have any issues with police and understands that people shouldn’t judge all officers based on the actions of a few.