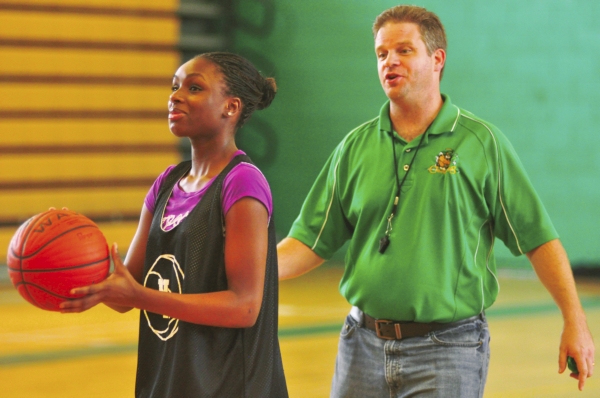 SPENCER — Brian Lytton announced his resignation as North Rowan High School girls basketball coach on Tuesday, ending one of the strongest mini-eras in school history.
Lytton’s four-year record was 64-32 and included a Central Carolina Conference tournament title, two Sam Moir Christmas Classic championships and a runner-up finish in the Moir.
There were also three consecutive 8-2 records and runner-up finishes in the CCC to East Davidson, annually one of the state’s top 2A programs. Lytton exits with the best career winning percentage (.667) of the 14 men and women who have coached the North girls.
“We won two out of three for four years, and that really is pretty good,” Lytton said. “I feel good about what our girls did. I feel good about what we did as a program and about where the program is now.”
In mid-July, Lytton was offered a position at West Forsyth High, a 4A Central Piedmont Conference school that serves the Lewisville/Clemmons area. The offer came unexpectedly during the annual North Carolina Coaches Association clinic in Greensboro. Making the offer was Mike White, a former North Rowan player and coach who is now an assistant principal at West Forsyth.
“If it hadn’t been coming from Mike, I don’t know that I would’ve seriously considered it,” Lytton said. “But once I sat down and looked at everything, it was too good an opportunity to pass up.”
Lytton will teach math. He’ll also be an assistant coach with a West Forsyth varsity boys basketball program that is directed by former Wake Forest player Rusty LaRue.
Lytton’s future goals include getting into college coaching, and this could be a springboard. Lytton’s father, Jack, was a a college head coach at Lees-McRae and Mars Hill.
Lytton’s daughter, Makala, graduated from North Rowan last spring and is a freshman volleyball player at Winston-Salem State, about 15 miles away from West Forsyth, but the coach said the proximity of his daughter is just a bonus. It wasn’t a serious factor in his job change.
Until a few weeks ago, Lytton was content to return to North for his fifth season.
“I was really looking forward to it,” Lytton said. “I don’t want people to think I’m leaving because we were out of players. Brianna White and Aundrea Godfrey are excellent players and there’s quite a bit of talent on hand. I would expect North to have another very good team.”
Lytton’s first North team was a modest 13-12 while competing in the 1A Yadkin Valley Conference, but the last three seasons were 18-5, 14-7 and 19-8. The 19 wins were the most by the Cavaliers since 2006.
Lytton’s 2013-14 team was the one that a chance to be special. That roster included Nycieko Dixon, Demeria Robinson, Special Washington, Aliyah Farmer, Tre Allen, and the Blaire sisters, Brielle and Ashley. That team demolished East Rowan, 71-40, in the Moir championship game and was undefeated, winning every game by at least 20 points, when Brielle Blaire went down with a season-ending knee injury.
Even without Blaire, that team won the CCC tournament — beating East Davidson in the final — and set the school record for points per game, averaging 60.17.
With Blaire, that team may have gone all the way in 2A and may have gone undefeated.
“Honestly, I can’t think of anyone who could’ve beaten us,” Lytton said. “That was the one year we had Brielle, and she could do so many things well. Every year we had very good athletes who could run, but we didn’t have that big girl.”
Lytton’s final North team, led by Farmer and Washington, was small but it won two playoff games, a feat the Cavaliers hadn’t accomplished since the Sophilia Hipps/Shemieka Brown days in 2005.
Lytton leaves on a high note, his job well done. North was 30-87 in the five seasons before his arrival.