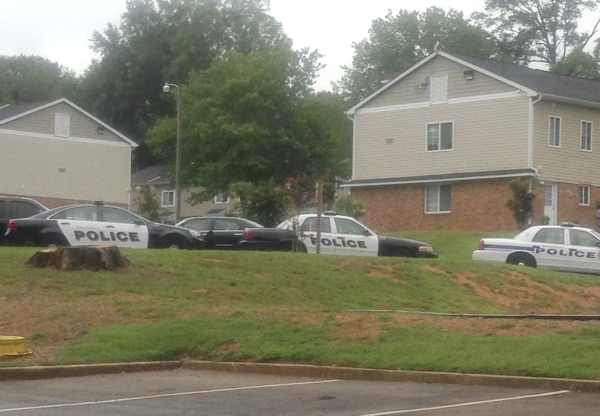 A heavy police presence at the scene of a shooting at the Colonial Village Apartment complex, located on D Avenue. The shooting incident was a domestic situation, but started not far from a playground at the complex where children were, a witness said. Submitted photo

SALISBURY — Police are investigating a Tuesday afternoon shooting at the Colonial Village Apartments that sent children running from a nearby playground.

A witness told the Post he heard six gunshots and about six additional shots while at the complex, located on D Avenue. He believed the incident was a domestic situation.

Kevin Smith was helping a friend move into an apartment when he heard the gunshots. There were about three children going to the playground, Smith said, but when the shots rang out, he ushered them toward him.

Smith said the children’s mother, who was nearby, scooped up the children and took them inside an apartment.

Smith said one man fired into an apartment building and then another man fired back at him. After shots were exchanged, the gunman took off through the woods toward Rite Aid and BB&T bank on Jake Alexander Boulevard.

Police were in the area of the bank and apprehended a suspect. Police have not released further details at this time.