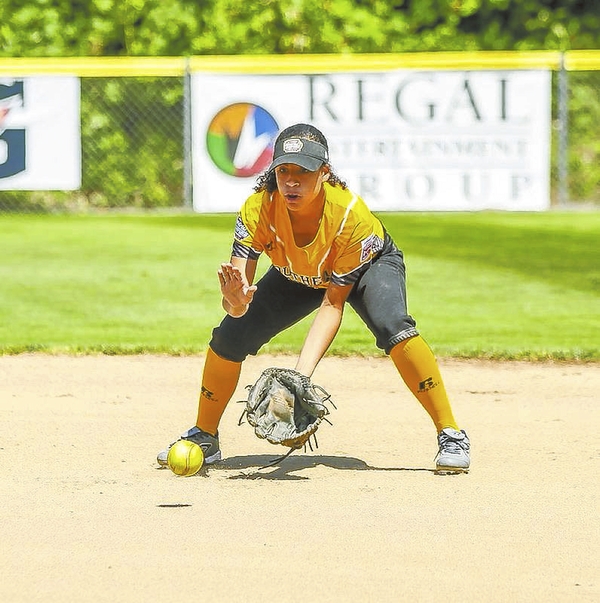 marshallhollis.zenfolio.com/juniorsoftballworldseries ... Rowan’s Olivia Marshall fields a ground ball at second base during Monday’s action in the Junior Softball World Series in Kirkland, Wash.

Manager Johnny Meadows said the Rowan Little League 14U team hasn’t played close to its best softball yet, but the team improved to 2-1 in pool play by beating the host club, Kirkland, Wash., 5-4, on Tuesday afternoon in the Junior Softball World Series.
“We’ve been flat,” Meadows said in a phone interview. “But I did see the intensity start to pick up today around the fourth inning.”
Rowan had to come from behind three different times to beat Kirkland (1-2) and scored the tying and go-ahead runs in the sixth.
“They’re a good host team,” Meadows said. “They’ve been competitive with everyone.”
Rowan got a boost from Kali Morton, who was the winning pitcher in a relief role. Morton struggled a bit with two walks when she entered the game in the sixth to replace starter Aubrey Tuell, but she had a 1-2-3 seventh with two strikeouts to close things out.
“It was a lift for everyone to see Kali back in the circle,” Meadows said.
Morton was sidelined early in the Southeast regional in Salisbury by a pulled muscle. Tuell has carried the pitching load since them with some help from Annisten Christensen.
Catcher Jentri Meadows, Johnny’s daughter, had two doubles on Tuesday to pace Rowan’s offense.
Jentri has a younger sister, Bentli, who will be playing in the World Series in Portland, Ore., with Rowan’s 12-U team.
After losing 13-4 to Ohio on Monday, Rowan needed to bounce back and did so.
“It’s the first game that a lot of these girls have lost,” Johnny Meadows said. “We had a couple of long talks, but there’s only so much you can say in a pregame speech and you can’t ride them too hard. I just reminded them that they’d come too far not to play they kind of ball they’re capable of.”
Rowan struggled defensively in the top of the first and got down 1-0.
Rowan tied it in the second when Jentri Meadows doubled and scored on a passed ball.
In the third, Tuell and Hailey Lane had hits, as Rowan scored twice to tie the game at 3-all.
Trailing 4-3 going to the bottom of the sixth, Meadows’ double and Ally Young’s single tied the game. A groundout by Lauren Coughenour scored the go-ahead run, and Rowan held on in the seventh.
Pool play concludes today with Rowan taking on the Canadian champions from British Columbia at 1:45 p.m. Four teams advance from each pool. Rowan will likely be the No. 2 seed from its pool if it wins — or the No. 3 seed if it loses.
“It looks like we’re in the stronger pool,” Meadows said. “And I believe we’re one of the teams that has a chance to win it.”

Nick Lyerly has another strong round at The Big…